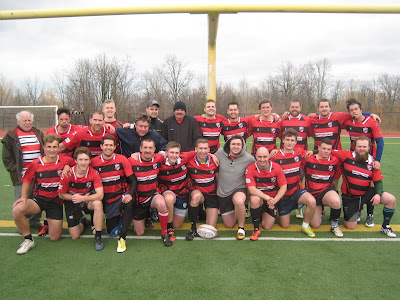 We went to the Burlington tournament and while all the important teams were playing at the Burlingon clubhouse we were sent to a high school nearby (Corpus Christie) to play (on a turf field) in a mini tournament with Burlington seconds and Hamilton.

We managed to put together a team with assorted players.
Glenn Butler (scored his first 4 tries for Grimsby and named man of the match), Gehard Swarts scored first try for Grimsby), Thomas Davis from Blessed Trinity High School.  Arthur Willet also came from Blessed Trinity.  Some previous players returned including Jake d'Achilie, Will George, and Martin.  We had a couple of players from Mohawk, Curtis Onaczyszgn (a mouthful) and Theo Machado and another player Luke and a friend of Will's..  We also borrowed a prop who came all the way from Philadelphia. Bob wouldn't play on artificial turf so he did all the refereeing.

Anyway we defeated Burlington in a close game and then played Hamilton to a tie which we won in overtime.  We were a bit lucky in that we ran out of props (not lucky for the props) and the scrums went unopposed which gave us much more ball for the backs and they could run at ease.
A good day.
Posted by b stuart at 6:41 PM No comments: