New Years Touch (played for two halves (the second half much shorter than the first, due to snowstorm)

Weather: little snow but -2 with a cold wind from the south west.

Attendance:  one girlfriend, one daughter and  two girls (twins age 8) forced to come by their dad (come on we'll have a great time) , and  Robby Millar who showed at half but of course had fully intended to play.

We actually had twenty-five players this year (a unofficial new record: since records were kept)

I have lost the paper with the names on it so I will not list everyone. 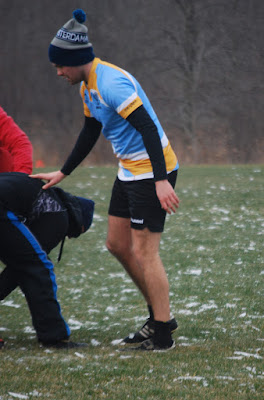 Cameron (above) came over from Ireland in 2015, and thought he should dress in shorts as Canadian boys would (next year he will be bundled up). 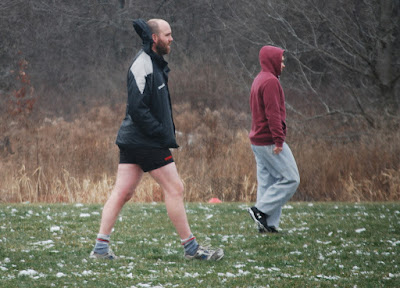 Vic (above) thinks the fewer clothes you put on the fewer you have to take off. 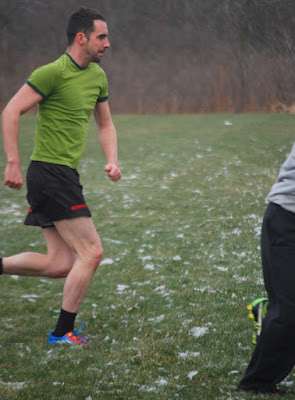 And then there is Chris, I am not sure what he was thinking (he did not last long).

Our little blog had 32, 209 hits since its start in Dec 2008 and  we had 8,500 hits in 2015 which was 1,500 more than in 2014 which was 1,500 more than in 2013.  I think an awful lot of people around the world  are disappointed when they type in "Hooligan" to google and get our effort (small town rugby team) as one of the choices. But that is tough, they should stop admiring hooligans and do something good in their life, like play rugby.
In case you do not know Grimsby, these are photos from Beamer's Point on the escarpment overlooking the town and Lake Ontario.  Come visit and see the rugby club.

Since 2010 the most active blog has been  " Wilmot away" but this blog has stalled and a reading I made of Les Barker's poem "Detritus" at the 2013 dinner got 244 hits last year to massively overtake Wilmot and is now at 469 views.

We hope everyone has a great 2016, which just happens to be the fortieth season of the club.
Posted by b stuart at 3:28 PM No comments:

This year's annual dinner took place for the second time at the club (this was specially requested by Ross who missed most of last year ceremonies- he was there but missed them). The clubhouse now has new urinals, new floors, new changerooms (almost),new signs (thanks Eddy) and a new (well used but new to us) defibrillator. Once again the meal was provided by Brad and it was was an excellent prime rib affair.  The dinner went very well and no condiments were injured during this event (they were locked up).

Rookie of the Year went to Duncan Earl who plays in the fall with Mohawk but also plays Rugby League with Brantford.  Duncan distinguished himself a a first time Rugby Union club player.
Most Improved Player went to Heri Lewesso, a first year player with the club, and who played at GSS and goes to Trent University.  He did very well in the centers this year (he came out as a flanker).

A special Manger"s award (not given out regularly) was given by Club Manager Ross to Jon for all his hard work and dedication over the year.

Player of the Year was given by Ross to Nick Lemieux who came back from a year of injury to play the #9 spot.

Clubman of the Year went to Brendan Vorstenbosch for his work with the renovation of the clubhouse this past two years. Brendan does everything but specializes in plumbing (he could have put in automatic urinals but we are athletes and can flush : so please flush guys)

The Deer's Rear went to Vic who knocked the team coach into the new Niagara Hospital and made him lose about 15 minutes of his life he will never get back (also a night on a stag run).

The Annual General Meeting of the Grimsby Gentlemen Rugby Football Club took place on Monday November 2nd at the more finished (but not quite) clubhouse.  Because of our Trillium grant in 2015 we met in the elegant confines of the main clubroom  with 9 members present (and one non-member baby).

Reports were heard and the election of officers for 2016 was eventful only in that Chris Atkinson stood for and was acclaimed as the new secretary of the club. Chris is a life member of the club, a former President and player and the individual who got us to acquire the clubhouse from the town and led us in the first renovation and building of the field.  Chris has just recently moved back to Grimsby after being away for 10 or so years and we look forward to his guidance and experience for many years to come.


The club would like to express its thanks to Dirk Reichow for his three years as secretary as he was unable to run this year.

Sometime last year Nick and Adam switched portfolios and they continued in those positions for 2016.

Next year is the clubs 40th year (est. 1977) and we are looking forward to some kind of celebration in mid June and at the same time officially open a completed (hopefully) renovated clubhouse. We need to attract new players (we did very well last season in increasing our numbers) but this needs to continue.  Special thanks to Nick and Brendan for their extra work on the clubhouse.

A new high school team was begun last year at Blessed Trinity and they did very well.  Hopefully they will continue and we can grow some Grimsby players. 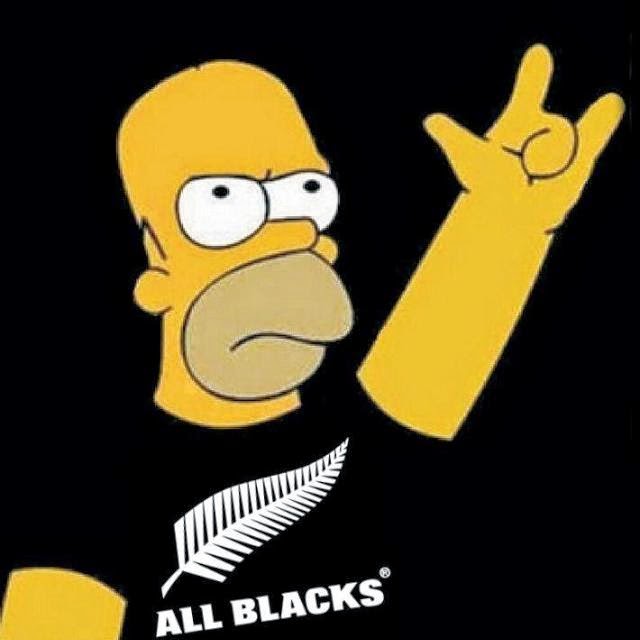