Stratford at home: (Week I of X)

Venue: Alway field looked good for the first league game of the season. 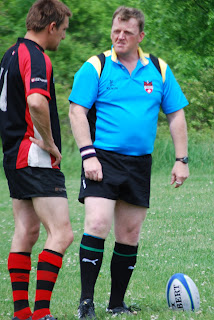 Referee:  Paul Byrne. ***  Paul is a Grimsby resident and generally manages a good game although he likes to take his time before he blows for the try.

Weather: about 26 degrees but felt warmer

Attendance:  A wildly enthusiastic crowd (standing room only) took in the home opener and cheered the boys on to defeat. Celebs seen in the crown were Grimsby Gentlemen life-members Chris Atkinson and Paul Rohner.  Paul was doing triple duty: he was playing washers (poorly - Michelle said) for the cancer fundraiser, running our bar and watching the game. Frank was seen and he did some water delivery and referee hassling.  Chris Goulding, the English player I have been talking about since January and who everyone thinks is in my imagination, was there but had to leave before he met anyone (I'm sure).  Martin Wolff came late, fired up the BBQ, and cooked up the burgers.  Thank you Martin.  Elizabeth joined the club as our first ever female social member* (needs confirmation)  thank you Elizabeth.


As of Tuesday we only had 14 players but unfortunately for them but fortunately for us Beamsville seniors lost their playoff game and their season came to an abrupt end.  So we had three players available we would not have had. Welcome to Brad and Tim who played in their first Grimsby game and to Martin a returnee from last year.  And thanks to Nick for delivering water but hopefully will be playing next week.
this is Tim. 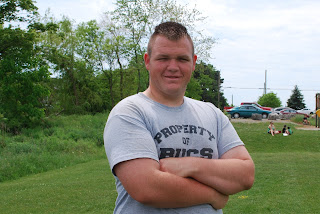 It was also Colin and Dean's first game as a Gentlemen. 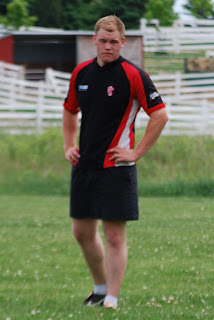 And this is Dean with Tara and a rugby player under construction. 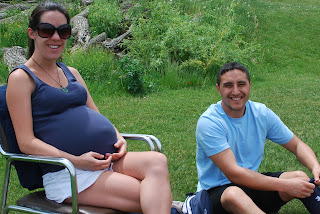 
Thank you gentlemen for showing up earlish? so we had most of the team warmed up and ready to go.  Stratford has most of the territory and play in the first half and scored early.  But we came back with a very successful drive from a lineout after the kick off and Dan touched the ball down.  Webs made the kick.  Straatford continued to control play using their big wingers who liked to run.  We were doing a lot of defensive work until  a hockey game broke out resulting in two yellow cards.  Stratford scored in the last 10 minutes to take the lead again.  A missed penalty at the end meant we went into the half. three points behind.

The start of the second was more of the same as Stratford scored three tries but could not convert any.  Our superior conditioning paid off, and towards the end of the game we hammed Stratford in and first Wally scored a determined try under the posts and then Vic in a like manner drove through a number of Swans to score.  Webs converted both to bring us close. I wasn't sure how close as I stopped keeping track.  Unfortunately in the last minute the Stratford winger ran the try in.  We need to work on our kick coverage and stop the return runs. Stratford scored six tries to our three but on the plus side so far this year no one has converted on us.

Thanks to Wally for coming in early and mopping 10 months of stuff off the floor.  Thanks to Bob and Milli for arranging for the food and manning the bar.  They were supposed to get it Friday night but got ambushed by a case of Bud and a BBQ.  A special thank you to Jennifer Reichow who made the great salads.  Thanks to Paul Rhoner for taking care of the bar while the game was on and for closing up.  We did well over the bar with the breast cancer fund-raisers there so we donated $50 to the cause, because we like breasts.  We now have 20 players registered and of those 7 are under twenty five  We could still use a few more players of any age. We need a collection for Kyle to buy some black rugby shorts.

Man of the Match:


I liked seeing Dean pick up and smash into the other team time after time while Brads throwing in of the ball in his first senior game a close second.  The other team honoured Milli our hard driving prop (who was actually in the centers for a while) as their pick.

Overall it was a loss but I don't think we should feel too down about it with a lot of new players in the team and things we can build on for practice.  I did't get many pictures as the camera stopped working but here is the 20 m drive for the first try. 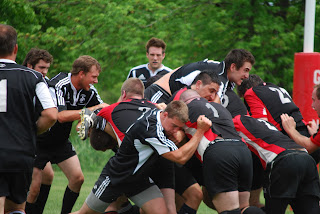 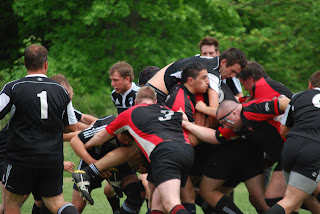 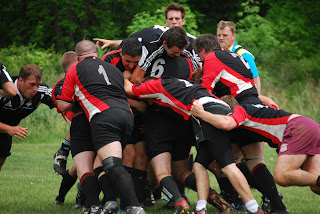 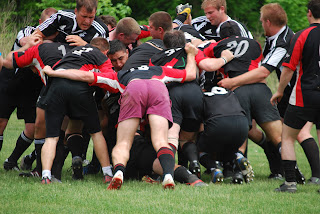 Next week The Brooker Cup.