Weather: A lovely day for rugby.

Attendance:  A couple of hundred as there were many competing attractions on.  I guess most of the fans were on the other side of the field. 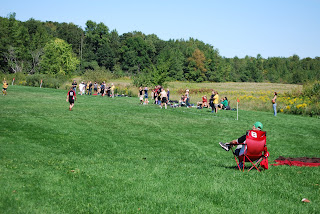 Presidents Report: Hamilton could have had a very strong side out as they won the NRU "A" division while we are at the bottom of the "B" but they had a mixture of players from their first and seconds and some old boys.  Our club which is now a combination of Grimsby and St. Catharines' players, both of which did not do real well in the "B" division, managed to make a game of it.  We did not have a lot of time to prepare as both teams had a number of players who showed up 5 minutes before kickoff or after (I mean Grimsby and St Catharines - Hamilton was ready and organized).  I showed in the first half during which Hamilton scored two tries and converted one.  To be fair Hamilton did have the wind advantage.  In the second half we score early as  Kevin Haner  smartly? hung off a 5 meter ruck and took a pop  to go over.  A longish conversion was made by Derrick Weber.  Then about twenty five minutes in Vic Blaney burst over the line to score and Derricks conversion put Lincoln (Gim/St Cath) ahead by two.  With five minutes to go an errant kick was blocked and the Hamilton winger picked up and scored to make it a disappointing loss (for us) and a disappointing win for Hamilton who thought they should have done much better.

A classic eight pick up by Kyle, supported by Dean and Martin 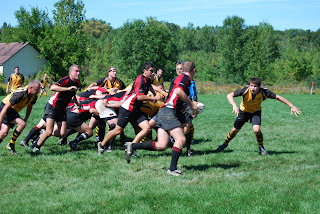 Ryan Coens went on for Milli, Wally Cone went on for Bob, Kyle McLean went on for Martin, Dirk Riechow went on for Jeremy and Mike Cuthbertson went on for Alex Millar in the second half.
Captain's Report : It was a rough game with a lot of pushing a shoving and some dirty play which  needs to be sorted out.  Only two yellow cards were handed out but more should have been done.  St. Catharines has made a club suspension for their player player involved. It would have been nice to have some organization at the start and be able to get everyone on the same page at practice.  Hopefully that will come. Congratulations to Mike Cuthbertson and Dirk Reichow (below) who played in their first ever rugby game. 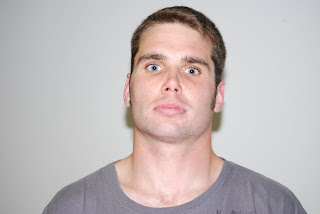 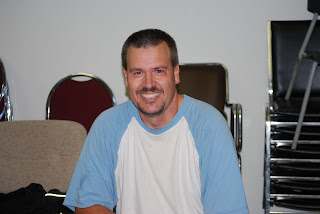 I didn't get many action shots as the battery was low.


Man of the match:  I don't know I wasn't paying attention, actually I was serving beer. Perhaps some of the many followers can remind me.

Lessons learned:  I think we all agree that the team regulation that was emphasized at the end of the match by Kevin that anyone over two hundred and fourty pounds should not be kicking the ball will be in effect from now on.  And anyone must get a fucking kicking licence from the coach.