The Misfits (Philadelphia) at home

Weather: very nice spring evening a bit coolish with a gusty breeze from the south.

Sponsors:  Brand new shirts thanks to Adan and to all the sponsors who paid for them.(We have all kinds of logos like a professional bike team.)

Special thanks to our sponsor Brendan Nytschyk of J.J. Cores who collected the tab for the Misfits all evening.

Attendance:  In spite of the international aspect of the game we do not think we hit our goal of 500 fans but then no one actually counted.


Thanks to all the old boys who came out to see us including those above and also seen around were Bill Stabler and Chris Atkinson (that I can remember).  They all agreed that they were glad they played before rugby got more difficult with lifting, more continuous play, drinking maple syrup and mustard and burning assholes.

The Misfits: are a touring side composed of several teams from the Philadelphia area.  They arrived at the club around 4:15 and started to practice from 4:30 to 6:00 before the game (I remember when we never ran on tour).  They were youngish and much fitter than the Philadelphia Irish we played two years ago. They did have their problems at the border though because the Canadian border guards said they were too drunk and the bus too messy to cross at 1 a.m Friday morning.  They had to repair to a restaurant, clean the bus, drink coffee for an hour or so to try to recross.  Even then they were interviewed and one of them was not allowed to cross because of two DWIs. (One might think they might like to have him in the country as a tourist especially when he is on a bus and not driving)   This whole process probably sobered them up enough to get enough sleep and be ready for us. (They did not look as chirpy in Burlington the next day.)

The Misfits were ready and aggressive and caught us off balance from the start.  They kicked a short kick off and recovered ball back and after a few cycles scored near the posts (2 min).  On our kick off they brought it back hard,  finding gaps in our defence and picking up yardage. They chip kicked in our end and  a  good cover run by Duncan was spoiled by a missed grounding  in-goal and led to the second score.  Philadelphia continued to run at us and by 20 min had their third try of the night.  However after that we seemed to get back in the game with some hard tackling and hitting and they no longer had their own way. Just before half time some quick plays in their end (after penalties) led to Vic putting the ball down for Grimsby.  The conversion was missed.

The bruising  hitting by both teams continued into the second half and Philly scored again. However from a scrum in their 22, a nice dummy switch left Derrick on a break and great offload to Nick Lemieux on a good support run led to a try between the posts.  Conversion by Cameron (his first points for Grimsby).  I did not keep good notes but The Misfits continued on to score at least a couple more tries but most spectators said we did very well against a large physical team that could move the ball well.

I happened to go to see them play Burlington III in Burlington (and I retrieved our game ball).  It was a lot like our game except with the wide field the Misfits had more space.  They also scored on the opening kickoff and eventually won 61 to 7.

Vic did a great job organizing, cutting and cooking for the social.  He also organized several games which including downing syrup and mustard.  In my day we only drank and sang.  As mentioned Brandon sponsored their team for beer and food and they were good guests and did not stay a long time (Alex suggested they go to the Canadian strippers - so they did) .Thanks to Jon and Jeremy for working behind the bar.

They chose Erick Alvardo as man of the match for his spirit in taking on the big boys. 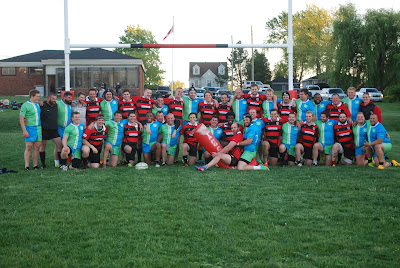 This is a quote from Dan Carter, New Zealand's great fly half.  The whole article which speaks to his desire to play for the All Blacks and about his career can be read in this article.

In general play, players are considered off side if they are in front of a team-mate who is carrying the ball or in front of a player who last played the ball. Those players are temporarily out of the game and are liable to sanction if they move forward towards the ball and this includes the in-goal. Law 11.1 states that a player can be offside in the in-goal.  I asked several referees about this interpretation and they agreed.

Venue: Alway field with the almost unrecognizable (inside) clubhouse

Referee: Ian Stewart - continued from the last game of 2014

Weather: Warm early May day of 30 degrees (way to hot to play) with a bit of a southerly wind

Sponsors: A whole bunch of new sponsors this year as we will be getting new kit, thanks to Adam.

Attendance:  We did not hit the 500 mark which was our goal for the first game but they were enthusiastically laid back (see picture below).


Team: (Managed to get 16 registered by Saturday morning - so the game went on).

Duncan and Eric alternate codes playing union on Saturday and league on Sunday. (A lot more exertion than I would want in a weekend).


Game:  The gods were not on our side this Saturday.  We have a touring team "The Misfits" from around Philadelphia coming on May 22 but our first league game would be the next day.  We are not all like Duncan and Eric (play two games a weekend) so we asked former St. Catharines Tigers now called St. Kitts which is the second team for Niagara Wasps to play last Saturday.  We only had 16 registered while they had 24 available.  However many of their players were their first team and a number of whom were or are playing for Brock University.  We were outgunned and out classed but we managed to put up a bit of a fight.  Our captain was injured after about twenty minutes (hope it is not another season like last year, Derrick) and we had to change a number of positions.  They scored a lot the first half but at the start of the second Duncan made a long run down the left wing and eventually Jake  touched down. He took a very interesting kick for the convert but missed.  We had a couple of more forays into their five between their tries but we scored no more.  We do know that if we had played them in two weeks when we were supposed to, they would have had a completely different team against us.