First game of our fourtieth season and our new shirts have one win in them.
Venue: Alway Field (at our almost finished change rooms)
These are the almost done showers.  Just imagine a number of hot, sweaty, dirty rugby players cavorting in the cool, cleaning and refreshing waters.  Now take that image and hide it deep within your soul and never think if it again. 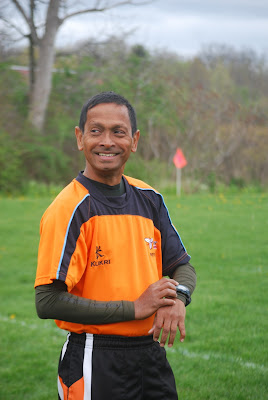 Weather:  cooler than expected with a damp field

Sponsors: Thanks Steamwhistle and Milli

Attendance: A small mob (very small) but enthused to be out watching rugby again.  And there was one gentlemen who was upset that the 2015 season schedule was up on the website and not the 2016.   As president of the club I was personally shocked that such a thing could happen - usually the website is at least three years behind.(It is a good thing as it looks like the schedule will change again)


Now if you are a regular reader, I am sure you are  astonished that Grimsby had 20 players for a pre-season friendly but actually 13, 16, 17, 18 and 19 were brought from our local farm club - the Niagara Wasps (thanks for the help guys).  The members are astonished we had 15 registered players for the game. We did have two players watching - James II and Austin (thanks for running the lines Austin).

Game:    The game started with a kick-off (as usual) and we were immediately under pressure as they had some good straight forward (and heavy) runners so they touched down at the edge after about 10 minutes.  We kicked off after the unconverted try (as usual) and they again put us under pressure and a long kick was fielded by the fullback Cameron running back toward our line with pressure on him so he ran in to the try zone and either tried to kick the ball so that it bounced off the upright and back over the dead ball line or, probably more likely,tried to clear it through the uprights and into touch (not impossible as Cam has a great kick).  However neither happened as the ball glanced off the posts onto the field of play and Etobicoke picked it up to touch down at about 13 minutes gone in the game. It looked like it would be a difficult game and the rest of the half was.  We managed to keep them from scoring the rest of the half as our offense warmed up.

The second half (against the wind) was a different game (said the astonished referee) but we had some secret Niagara weapons.  The half started with a kick off (no change there) but we put them under pressure and within 5 minutes Vic has scored in the corner in front of the fans (This has been recently changed due to T.V. replay and Vic offloaded to Dean who actually scored). This seemed to get us going as our scrum was providing good ball and we were wining our lineouts) and at about 10 minutes Jake takes a loop pass and scores in the other corner in front of the dead trees. Cam (who was annoyed at the first kick) slots the two points from a fair distance out.The nice thing about our field is that you are never too far from the posts. That kick put us in the lead for the first time and two minutes later, Cam boots a 35 m penalty and we take off.  A few misunderstandings between certain players of the teams (possibly language difficulties) leads to Etobicoke making a counter kick from their end zone right up the middle to Cam who was not to be denied as he ran through much of their team (It took him six games to score last year). He kicked his own conversion.

At this point my concentration kind of gets lost and stuff happenes so Ryan Cooms scores in the corner at  about 25 minutes and Dan Figgs scores at about 30.  Cam converts both and they were not easy kicks.
So far Cam 16 : Etobicoke 10.  With a couple of minutes to go Etobicoke are within 5 meters and we are lazy and end giving up a penalty try (I think it was Cam)  Cam 16: Etobicoke 17.

Good game by a number of people considering it was the first in awhile and there were a lot of players who had not played together in  awhile.  Chris has not played in a number of years, Dean came back from New Zealand to play for us, Will took a year off playing for some other team and Brad has been working on his boxing technique for a couple.  Welcome back we missed you all. .

We had a delightful beer up thanks to Steamwhistle and Vic.  Beer and peameal bacon.  Life is good.
Cam was chosen man of the match - well done even if you did hit an upright from behind the goal.


Breaking news:  We may be changing leagues so keep tuned in.
Posted by b stuart at 10:02 AM No comments: