You followers of this blog, all eight of you, might be confused as to why the last game is happening now and why it has turned into the Brooker Cup for 2013.  Well I will tell you -  but focus, I will not repeat it.  The Brooker Cup is played annually between St. Catharines Tigers and Grimsby Gentlemen and is named after a beloved character coach, who over his career was well known to both teams.  The Cup was played first at the opening of the clubhouse in 2007 and is to played at the choice of venue by the holder of the Cup.  St. Catharines is the holder (for the last four years) and the game should have been held in St. Catharines.  However it was an unusual year in that during the league we only played the Tigers once and that was in Grimsby.  (By the way, a lot of this is filler as the game was played awhile ago (August 22) and I cannot remember much (getting older), I cannot find my notes, my usual photographer, Jennifer, was not there and my wife took the good camera so I was using a video camera)  Now I can't remember what I was talking about.

The game the Tigers played in Grimsby was on July 27 but the game was halted due to an injury to one of the St. Catharines players and the teams had to wait for an ambulance.  (Two ambulances to the field in the same year, really). It was almost half time but the wait was long and the captains said they would replay the game later.  The score was Grimsby Gentlemen 5: St. Cathatines 10 when halted.  It was the last game for the old jerseys. 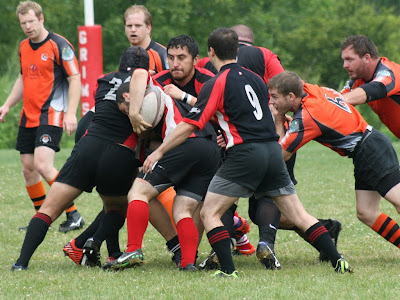 However St. Catharines had field problems and as we wanted to get the game done before people left at the end of August, it was agreed that the league game would be replayed in Grimsby and it would also be the Brooker Cup.  The date was Thursday Aug 22 when Grimsby Gentlemen would attempt to win back the Cup they lost four years ago.
Venue: Alway (oh yeah you already knew that)
Referee: Maggie Cogger-Orr (a very aristocratic sounding name - I think she played for the Toronto Scottish) did a great job with a bunch of hoodlums.
Weather:  It was a nice night for rugby I think, I can't remember
Sponsor:  Profast fasteners, JJ Cores Vehicle Parts, and Steamwhistle Beer.
Attendance:  A multitude (or maybe it was only a tude) of enthusiastic spectators.
Team: . Nick Lord , 2. Brendan Sculland , 3. Jon Millington (40 min), 4. Colin Comfort (65 min)  5. Jeremy Young 6. James Vinneau (40 min), 7. Dean Crozier, 8. Bob Mavro , 9. Nick Limeaux 10. Derrick Weber (C) , 11. Brandon Nytschyk(40 min), 12. Vic Blaney, 13.  Martin Colyn 14. Pat Brown, 15. Jamie Farrell, 16. Brad Vorsetnbosch (40 min),17 Martin Van Den Hurk (40 min) 18. Alex Millar (40 min), 19 Adam Amirault (15 min), 20. Ross (Turbo) Matheson (40 min) (a former player from 20 years ago - was brought in from Stoney Creek as a replacement front row in case he was needed.  St Kitts had three from Stoney Creek.
Coaches Report:
We started out with the plan of not letting this team score early as has happened in most of our games this year.  We partially succeeded as they did not score until the 10 minute mark.  We were being outplayed by their forwards who were stronger in the scrum and good around the field.  The second score happened soon after and it was converted.  The hooker said we needed more weight and I said he should fill his pockets with stones.  St Kitts kept most of the ball during this period but after another penalty was added the turning point of the game took place. St Catharines has a big hard running player from England at inside who had already scored a try and at about 25 minutes our Webs took a run with the ball and was taken down harder than really needed (the kind that injures shoulders) by this center.  A little bit of jawing took place between the two.  After the next scrum (Webs had knocked on which put him in a fouler mood), the Tigers gave this center the ball who ran as hard as he could right at Webs.  But our Webs stood his ground and made a great tackle (Martin Van Den Hurk said it was the tackle of the year) but unfortunately the center for the Tigers was hurt and had to be taken off.  The veteran Jeff Innis (who we have not seen in awhile came on).
They now had to reorganize and pulled a lock from the scrum (a Stoney Creek Player) and put him in the center and all of a sudden the Tigers scrum was not as dominant and we managed to get the ball in their end a few times.  After a lineout drive and a couple of rucks, Martin Colyn dove into the end zone to start our comeback.  We scored another try and conversion by Webs which took teams to half time and our game plan was working (survive their forwards and get it to our centers) not the one about not letting them score early.
Half time score:  Grimsby Gentlemen 12 : St Catharines Tigers 15.

The next half was a little more equal in terms of possession and territory.  Grimsby was rewarded about half way through with a ball from a ruck at the Tiger 15 m line going to Martin Colyn who juggled it a couple of times but kept control and drove to the 5 m where the next ruck sent the ball through Webs to the winger Pat to score a try and put Grimsby ahead for the first time in the game.
Only being two down brought out the best in St. Catharines and they worked hard to get the lead back but some good defence kept them out until an errant pass was intercepted by Martin Colyn on our 35 m line and he outran everyone to score in the middle of the posts.  The try was converted and essentially the game was over.  Lots of players played really and Nick Lemieux was picked as man of the match by St. Catharines.
Final Score:  Grimsby Gentlemen 24 : St Catharines Tigers 15.  ﻿
Congratulations to St. Catharines Tigers for a very good game and for being great holders of the trophy for the last four years. With the win and scoring 4 tries we not only won the Cup but moved into 7th place in the league with a record of three wins, four losses and one tie , one point ahead of St Catharines  and only three behind Wilmot. 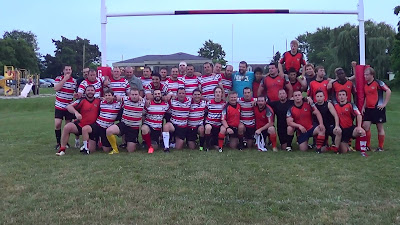 Thanks to our younger players who will off at school in the fall (Brandon playing for me at Mohawk, Jamie who is going to school out in B.C. and definitely not involved in underage sex chants and Jake who is still in high school).
I am supposed to thank Frank for taking the pictures (one with his finger in front) but he was pushing the wrong button and did not take any.  Usually the blog slows down now that the regular season is over but stay tuned for the Christmas Party and Awards night which usually gives me something to write about. It looks like there will some games in the fall but I am coaching Mohawk College again this year.
Next year everyone is looking forward to the scrum law changes which seems to take a bit of the hit away from the front row but with Brian Burke on the Rugby Canada Board we might get fighting into the game.  Actually Brian is a former player at Harvard and says that "rugby is tougher than hockey".

“One mistake in rugby by one player has more consequences for the rest of the team than in any other sport.
“It’s a great game. A warrior’s game.” 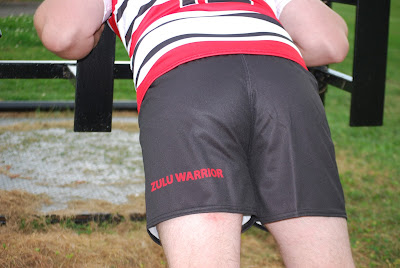 The people that don’t want contact should play other sports,” said Burke. “There are wonderful sports you can play where you’ll never get an injury. Be a swimmer. It’s a great sport. You might get a cold but you probably won’t get a concussion."
"This is a full-contact sport. None of us that play it, none of us that coach it, none of us that work in it will apologize for that. People get hurt playing this game. People that don’t want to get hurt should play sports where you’re not going to get hurt. There are some wonderful sports where you’re not going to get hurt. I don’t enjoy any of them. But there are a lot of them.”
Amen
p.s. It was nice to meet Freddie Sayers, who is from England, is married to a Grimsby girl (got married in the pumphouse) and played for a couple of years with Toronto Barbs.  Somehow he ended up on our email list last spring and he ordered a pair of Grimsby shorts (size XL) which he picked up when they were visiting at the end of the summer.  Freddie will start his rugby season when he goes back.

August 17 - Last week of the league (except not really)


Venue : Crusader Park (third field on a hill behind clubhouse)

Referee: David Nelson (a member of their club but was the referee when we beat them at home)

Weather:  Warm with lots of sun.  The field was a little dry (see below)


Attendance: Lots of people but they were here for the Stoney Creek vs Crusaders game (we were playing on a back field)


However we did have celebs:  this is Alan Lee one of the first Grimsby Gentlemen coaches with his daughter (not sure about her name but will find out).

Other notables at the game were Evans,  Atkinson,  and Wilson in the foreground (all former players) and Lord (keeping track of his son in the background) 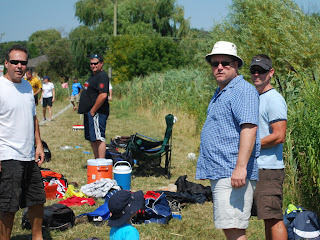 I cannot write much about the game as I got to the game with about 10 minutes to play (was at the Flag Championship: see previous post) and it did not look like a comeback like the last time we played this team this year.  They seemed to be a little younger, the weather was cooler, the same ref but he was at home and we were a little less strong (fewer subs) 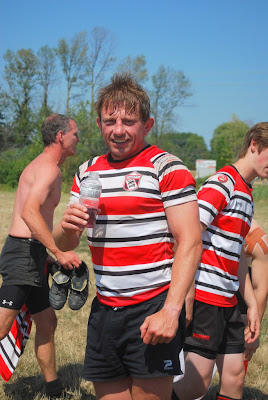 Chris looked so good in our new jerseys they gave him the Crusader's superman cape after the game.


They also made one of their players wear and drink with a Darth Vader mask on.

I am sure glad we don't make players do silly things at our club.


August 17 was the final tournament for the Niagara Flag Rugby Club which was held in Grimsby.


Our juniors (jk to grade 2) improved continually over the season.