Letter to the Grimsby Legion

First let me congratulate you for all the work you and your group have done with the veterans of foreign wars and peace actions and also your work in the community. You are doing a wonderful job.
I am writing commend you on the actions of your security people who have worked the last couple of years when our group the Grimsby Gentlemen Rugby Football club have come in. Every year we have our annual awards night and the tradition is that after the awards we head for the Legion drink a few more beers at more reasonable prices (how do you do that?) and to cheer up any veterans and others who are present.

We now realize that you are not allowed to be on the dance floor with drinks and most of the members are aware of this rule. Warning a person 6 times and they still do not comply, I believe justifies their ejection and has nothing at all to do with their race. And thank you for not allowing him back in with his cigar, as we all know how dangerous fires are at the Legion. This year it seems to have gotten out of hand (I was not there), but I do accept that nudity should not be permitted in a public place (unless all agree of course). Now I am sure you realized that there was the alcohol factor and we have to look at the natural exuberance of young (well, middle-aged young) men. So I am glad your security did not call the police or anything like that and I suspect they had a good laugh later on. After all, you have to admit, when you think about, it "I dare you to tackle a naked man" is funny (maybe not right then but later).

I would also like you to congratulate the D.J. She played some gay (joyful) Greek Island dance music (gay) for the our members. She did not have to do that.

While we are on the topic, we were thinking that next year we might rent a room for our Christmas/Awards dinner in 2011 right at the legion and save the travelling. Perhaps I could come in and get the types of meals you provide and costs. This would not happen until next December so you have lots of time to consider it (I think we would like to avoid Santa Claus Parade Night).
Thanks for all the good works you do and please remember to give my personal congratulations to your security for their restraint and tell them if I ever need any security, I would hire them. Same goes for the D.J.
Yours sincerely,
Bill Stuart
President
Grimsby Gentlemen Rugby Football Club
Posted by b stuart at 11:58 AM No comments:

For the second year, as we haven't pissed off management or the waitresses yet (almost), the Grimsby Gentlemen RFC Awards night was held at Nathan's Depot Pub in Grimsby with about 300 attending.
Jon Millington on the left below was presented with the Clubman of the year award by last year's winner Bob Mavro. 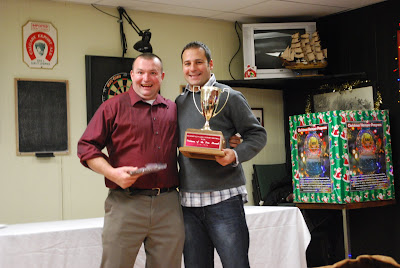 Player of the year for 2010 was Derrick Weber on left, presented by Club Manager Kyle Wilson 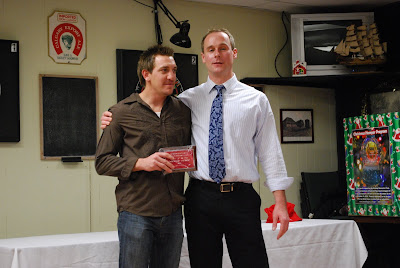 Comeback players of the year was Martin Van Der Hurk being presented with the award by President Bill Stuart in the great vest and tie. 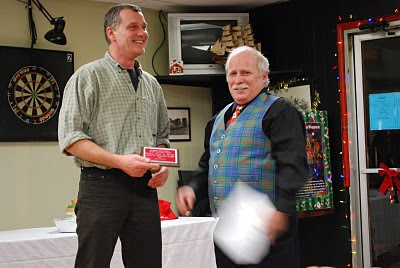 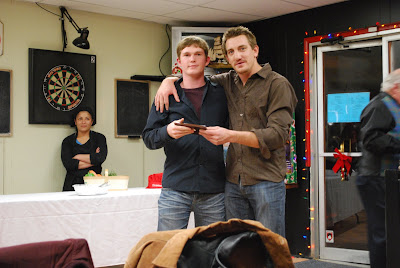 Michael Stuart won the rarely given out Fall-Down award as he got hurt before the season started and did not play a game. 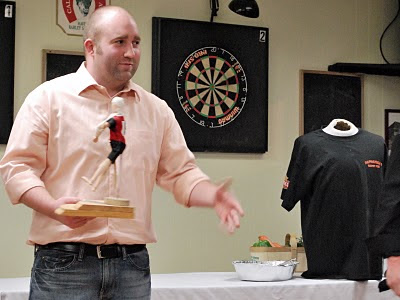 The coveted Deer's Rear Award was won by Derrick Weber for his perfect pass to the opposition St. Catharines which allowed them to score when suddenly he realized that we might win the game after all. Derrick had he promised to buy a keg if we won. His scheme did not work and we won anyway. 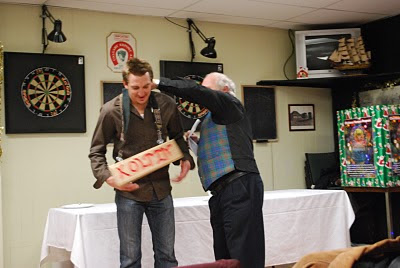 Some table surfing was tried later on. (no winner was declared) 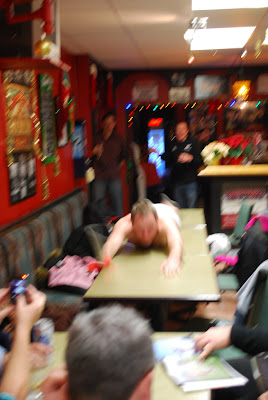 Later on we all went over to the Legion (see next blog) to wish the veterans there a happy holiday. Unfortunately no pictures are as yet available.

Warning this picture is rated only for mature members over 14 or with parent's permission.
In other words (d) is the most correct answer. 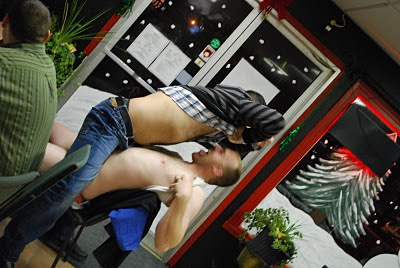