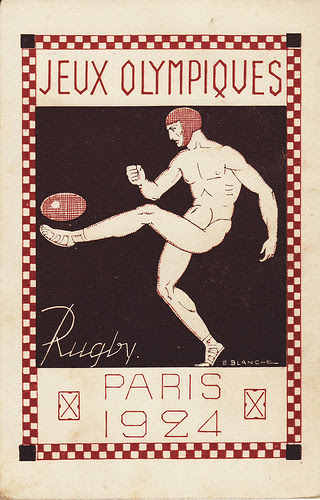 Who needs uniforms, just headgear and sandals.  Probably why the Greeks are #99 in the world.
Posted by b stuart at 1:49 PM No comments: 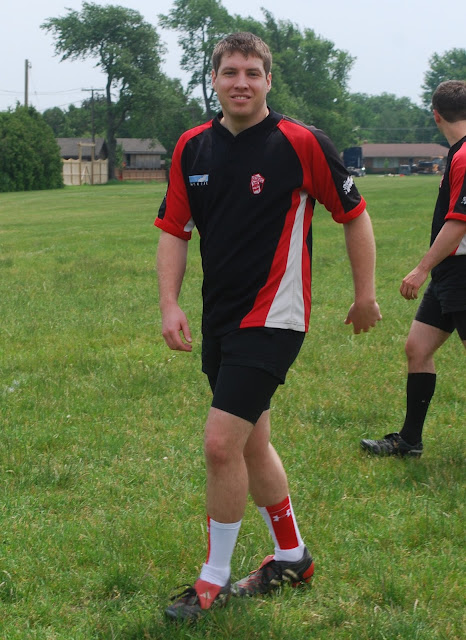 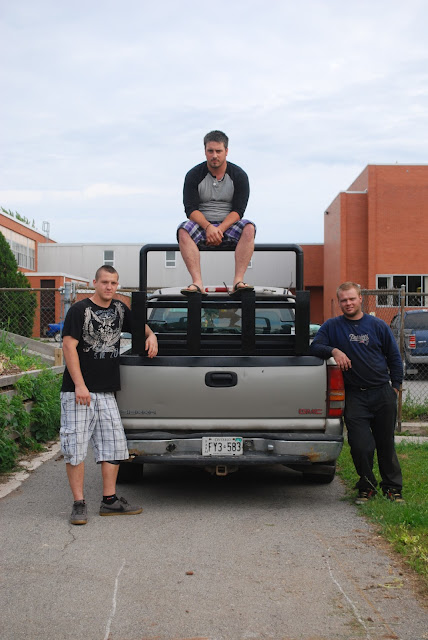 Vic took it off himself.
Posted by b stuart at 11:15 AM No comments:

This is the one hundredth post in the series about events taking place at the Grimsby Gentlemen Rugby Football Club and we have had 13 220 pageviews since Dec 2008. 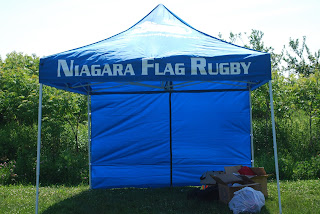 Saturday, June 15th was the first flag tournament of the season and it took place at our home field, Alway.
Considering the rest of the week was quite rainy, it was a great day for rugby.  The field was still a little wet and the grass a little long but everyone seem to have a good time.  Most of the other teams are more experienced as they play in elementary schools in St. Catharines, Niagara Falls and Fort Erie, so it was a bit of a learning process and we did very well.

Next tournament is July 6th in Fort Erie at Bertie Centennial Park. (about 45 min away from Grimsby)

Weather:  Another great day for rugby

Attendance:  I have been told I am not good at estimating (I probably have been told that around a million times), so I guess there were hundreds of fans there and Andy who came late as no one told him the time change.

We were a little worried that Burlington would stack their team (as they have done in the past) but basically sent a third fifteen which we usually can defeat.

For the  second game in a row, our backs have been able to find gaps and run through the opposition.  Martin was losing his molars and could not play so Webs went to fly half and Nick played a blinder at scrum half, attacking forward and finding space.  Martin Van Den Hurk who came late and expected the last 20 minutes went on for Bob who put a tooth through his lip in the kickoff. Martin did a great job at lock and jumper (first time in a long time)

The tackling in the backs was also good and we forced turnovers one of which Vic returned into the endzone only to knock it on while grounding it.  Actually it looks like he knocked it backwards but unfortunately the referee did not go to the TMO (which is me) to ask for advice - but no try given- and a 22 awarded to the other team not our 5m scrum.


Vic made up for it soon after with a great run and an off load to Kyle who scored under the posts.

The first half ended with a lot of pressure by Burlington on our line but we managed to hold them out with strong defensive skills (and luck).

The second half was slower with our forwards losing a little and Burlington doing better.  Against the run of play though a kick by Burlington was not covered (we were down a winger) and a couple of fly hacks allowed them to score.  After that we continued to keep the ball in their end mainly and Vic made up for his botched score by ending up in the end  zone with the ball twice more.

Not enough Burlinton stayed to have a man of the match rite but Jake D'Achille got the ca\ptain"s award for his rookie try.

Next game June 22 away to Norfolk Harvesters who play at Hellyer Memorial Park in Waterford.

Ran into Bob Hepburn at the Ireland game.  Bob was Grimsby's first ever president and one of its first players when the club started as a junior team in 1977 (he confirms) which began in the basement of Derrick Harries.  Bob became president when the club became a senior men's team a few years later. He was only in his early twenties then.

Weather:  nice evening but a little cool, just made for rugby

Attendnce:  With lots of interest it was way above the average

Sorry, I am a little late with this but I had a computer virus, more high school rugby, saw Canada play Fiji and actually have a life.

The Northeast Philadelphia Irish came to us in the second half of a home and home series (we went there last Easter).  Fifty-four of them including a women's team arrived in Niagara Falls around 4:00 in the morning, caused havoc in the hotel, saw the falls (they think) and came to Grimsby.  They were all kitted out in their new tour shirts.  A t-shirt had "Where's the bus?' on the back.  (You had to be there - in Philadelphia - at Easter)

A prop was injured (Nick) playing Wilmot so we made them give us one of theirs (Sian), seemed fair.

The warm up game was played by the Northeast Philadelphia Irish and St. Catharines Tigers Women (we had to borrow a team) .  The St. Catharines girls set the example by convincingly defeating the Irish with only 14 players.

I missed a lot of our game or wasn't paying attention but we seemed to handle the visitors easily (unlike two months ago at Easter).  Adam scored first and then went off with a cut head, Derrick converted.  Philadelphia came back with a converted try but soon Grimsby backs established dominance and Martin C. and Vic scored in the first half and Derrick struck for a penalty in there some time.

Second half was more of the same with our backs showing dominance nay brilliance with Martin and Vic again scoring and Derrick kicking enough to bring the score to 36 points for us.

It was a good game for us with lots of opportunity to run with the ball, the Irish were missing a number of players who could not make the tour and we weren't.

Vic and Martin had a great day together.


However sometimes Milli would get between them (must be in the first half).

The beer up was exciting, nay thrilling, with flying syrup bottles and three kegs of beer consumed (a new record for kegs and syrup at the clubhouse).


Also thanks to Jennifer for making many salads along with Nick Lord's mother.  Also thanks to Craig Lord (Nick's father) for manning the barbecue all night. Thanks to Kaley Stuart for sharing her expertise in dealing with our antiquated and unsanitary beer serving system. Congratulations to Vic on the social and to Brendan for fixing and cleaning the clubhouse.

There were four cars left at the clubhouse overnight (also a new record).

A tidbit of Grimsby gossip:

Who was that gentleman climbing Wolverton Mountain at noon on Saturday after a night of debauchery in the flesh pots of down town Grimsby?