Referee: Ian Stewart ** (Made a call for one of their trys too quickly - before it was knocked on - I wish refs would take their time in calling trys) Some one should enlighten me if it is tries or trys.  Just two yellows called one on us for interference and one on them at the end for arguing (or something like that) .

Weather: 25 - 26 degrees (warmish): the grass is getting pretty dry

Attendance: Was down a bit, with a few more on the other side I would estimate maybe 300.  The rest might have been vacationing in Cuba. 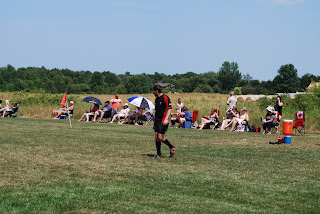 We did well especially after last week for the first fifteen minutes or so and managed to keep them in their end until Webs blocked a clearing kick and fell on it in the end zone. The conversion was missed. St. Catharines came back to tie the game fairly quickly and went ahead on a scrum half pick near our end.
Near the end of the half, we took a yellow for interference and the Tigers scored from a running penalty.

The second half was played generally pretty even in the middle of the field, we never really got close and they scored twice. (actually once).  A little bit of argue at the end and game over.  We will have to win out first game on the road. 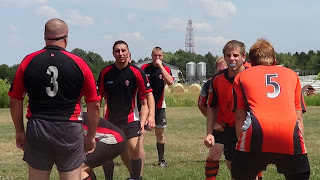 This is Vic putting a perfect stop on their big man. 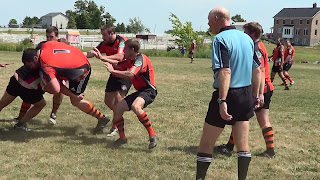 Congratulations to Martin Colyn picked as man of the match.

Well done, we played better on the field this week and this was against the top team in the division.  We just need to be more organized and know what to do in situations.  We are still tackling poorly which needs to improve for us to be successful. We also need to hang onto the ball in contact more, we are getting little continunity. Thanks to Frank who came around and was persuaded by me to run touch since I had two cameras and the touch flag and a bad knee.  Frank got to grouse at the ref and tease the other team.  Two others who have not been around in a long time were Eddy and  Evi. 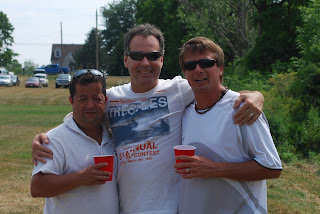 If the clubhouse smelled better this week it is because Alex Millar went into the washrooms and cleaned them up.  The smell of pine was different from the usual smell.  Thanks Alex.  I did not have Andy my camera man to take the videos this week and the ones I took are not very good and I cannot seem to download (or upload) them to the blog, but someday.  So I do not have many pictures so here are some from the flag tournament in Fort Erie in the morning.

The top is the u 14 with James and Dirk coaching and the bottom is the u 8, which I coach (sort of). 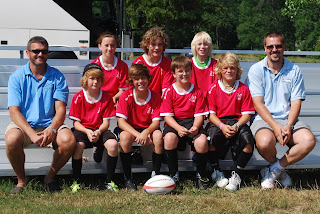 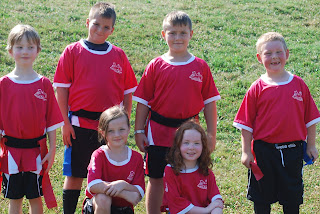 Thanks to Jennifer for making salads even though I forgot to ask, the Tigers were impressed.

You may wish you were playing for other teams, but Niagara firsts got beat 95 to 10 on Saturday by Barrie and the Muddy York were defeated 142 to 0 a few weeks ago. The ball on the field was like a bar of soap in the showers.