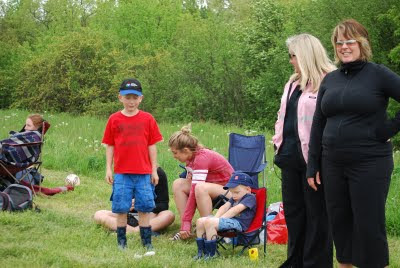 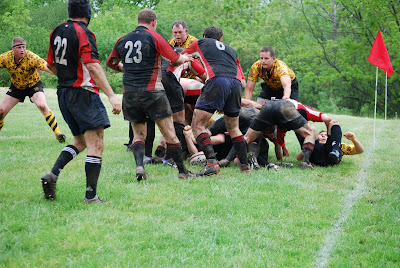 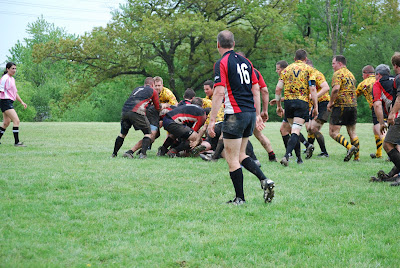 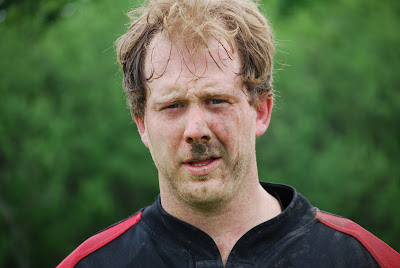 Stratford Away: Week One 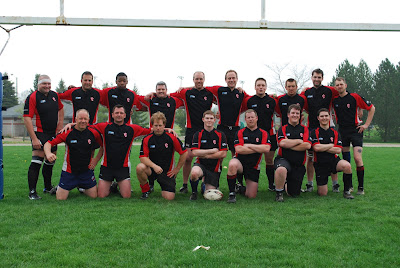 F.R.: Wally Cone, Alex Millar, Dean Gibson, Jamie Scully, Andy Breuls, Nick Howe, Nick Lemieux
B.R.: Jon Millington, Bob Mavro, Trevor Trotman, Dylan Kinch, Vic Blaney, Kyle Wilson, Jeremy Young, Derrick Weber, Daniel Wolfrath, Stu English
Nathan Rowbottom came about twenty minutes later.
President's Report:
I got a nice chauffeured drive in a brand new Cadillac all the way up (thank you Wally). I thought the game could be cancelled because it was raining so hard on the way up but Stratford seemed to miss the afternoon rain.
We had three players play their first game as a Gentlemen. Wally "You don't quit playing because you get old but you get old because you quit playing" Cone is pictured below. Well done Wally. 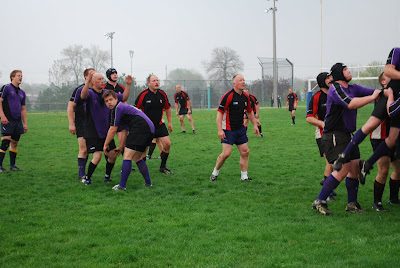 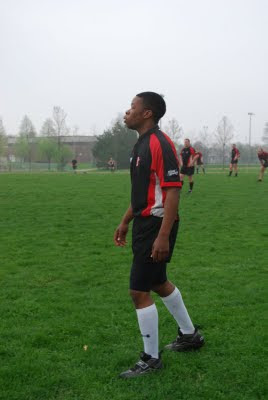 and Dan Wolfrath (We have a second Wolf on the club), here being lifted. 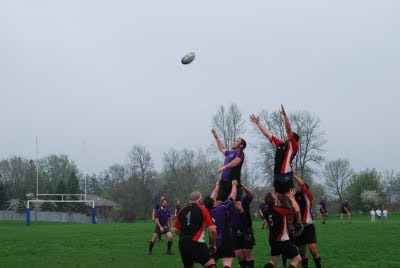 Also we welcomed back Andy Breuls who took a year off, Stu English who took two years off and Nick Howe who took three years off. I am sure the coach and captain were ecstatic when they realized on Thursday that they could have as many as twenty players for the game. A surprise change in the schedule a late as last Monday resulted in this game against Stratford and made the whole league more competitive with the addition of Stratford, St Catharines and Norfolk. After doing a lot of travel in the last couple of years, this is the farthest we travel this year. I recommend that the coach should run the team a few more laps to get rid of the weight we got from the food provided by the Swans. We at least won the man of the match drink off, the boat race anchored ably by Nathan, and the sing song.
Coaches Report:
The Swans came out very strong and kept us in our end for a considerable period, scoring after about 5 minutes and again after 20 minutes. We eventually got into their end and had some chances to score but could not finishing.
Half time score: Grimsby 0: Stratford 10
The second half was actually fairly even but they scored again at about 60 minutes. Near the end we had several lineouts inside their 10, but could not punch anything across. A lot of our inabliltiy to score and to stop them was rustiness from many players and inexperience from the new players who played better than could be expected. The scrums were good, the lineouts need work. It looked like we were just bashing against the other team without a plan. We need to activate our patterns and then make them happen. We did well for the first game of the season and so many new players. Stratford out agressioned (new word) us, especially in the first half. However, we did deny them a bonus point.
Coaches Man of the Match: Jeremy Young for getting around the field and putting pressure on the other team.
The other team's pick: Vic Blaney his play in the centers had may Swans avoiding that area. Vic won the drink off (but it was against an underage kid who then threw up in the urinals).
There is no under the willow this year because there is no willow. But we may have a third "Wolf" at the clubhouse. 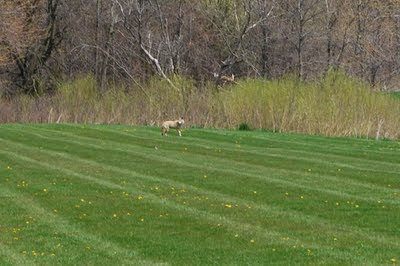 The annual New Year's Day Match was played this year on January 1, 2011. A thawed pitch led to a lot of soakers. 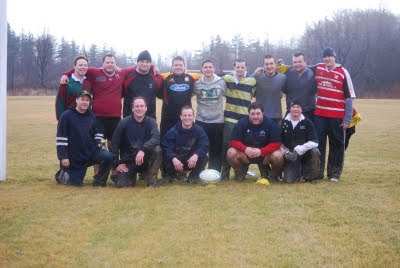 Frankie pointed out that to his recollection he has never lost a New Year's game and he was on the winning side again.

Here's Frankie looking a lot like Jonah Lomu in that he has number 11 on the back of his All Blacks jersey. 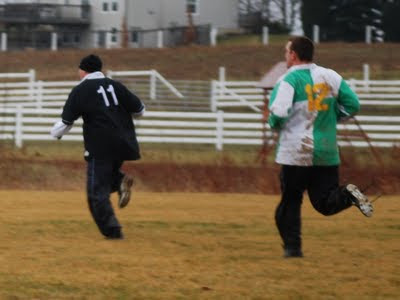 This is Webs chasing again as Nick takes off. 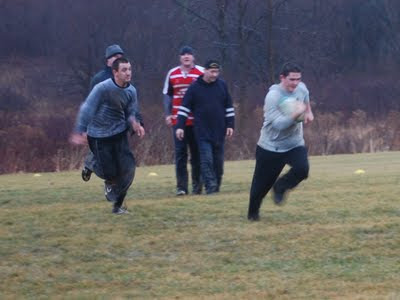 Derrick and Milli tied for the Bob Mavro food preparation award for their renditions of chili. 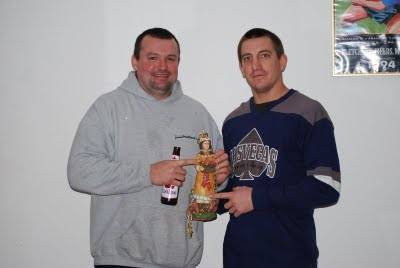 A good time was had by all.
Posted by b stuart at 6:39 PM No comments: