All the best for 2012: I predict a step forward for the club this year in numbers (junior and senior), playing and the clubhouse.

We again had a good game of touch for the first game of the year.  The temperature was a balmy 5 or 6 degrees but the field was quite soggy (at least it was better than a polar dip in Lake Ontario).  We had about fourteen out with four or five novices although we were missing a number of regulars (probably to hung over). I was in great shape since I did not drink much on the 31st because I was recovering from Frank's 40th birthday on the 30th (Frankie did not make it). I got a few pictures but the camera ran out of juice.  We played for about an hour and the final score was 7 -6 for the good guys.


Except for Andy, the guy second on the left who arrived just in time for the post-game picture a good time was had by all. 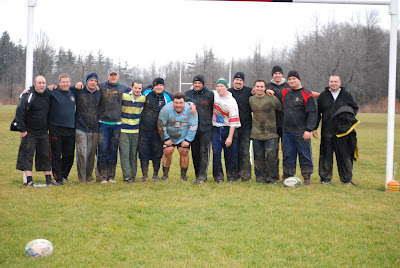 The Bob Mavro award for cooking was awarded jointly to Mike for cooking the burgers (left over from the season) and to Milli for organizing and bringing the roast beef.  An added advantage was when James went out to find a lost game ball from the summer  - he found it.

Since starting this blog three years ago we have had 6 124 hits and the most for an individual blog was this year's review of the game against Waterloo with 180 hits. At that time we only had around 3 500 hits. We could use a few more followers.