Week IX (actually have no idea what week it is): Stratford at home

Referee : Richard Cooke (last game for us was in Norfolk) *** (has a bunch of the new laws in his head)

Weather: About 24 degrees (a really nice afternoon for rugby)   Played at 3:00 which also was nice as they had a shortage of refs this week.

Attendance: Not an accurate count but estimate of 4 - 5 hundred.

Only fifteen players again although I put a couple of extras on the game sheet hoping the might show up. Stratford has 19 players but they showed up later than us, which is unusual. We probably expected a bit more from Stratford as they have done very well this year having won all their games  and the fewest number of points scored for in any of their games  was 29. So we thought they would dominate somewhere but really they didn't.  In fact except for a long run by the scrum half at about the six minute mark we controlled most of the territory and possession in the first half.  In fact we had three or  four times when we took the ball over their line but could not get it down until Milli finally barged through with ten minutes to go in the half.  Stratford came back strong but Pat, using his head, managed to change their concentration and got a yellow for his efforts as did the other guy (his opposite number)

"For he to-day that sheds his blood with me, shall be my brother;" (and get 10 minutes in the sin bin) as Henry V once mused.

I try to butcher Shakespeare as much as possible when we play Stratford.

We were probably as suprised as Straford was the score being low and tied or we just might have been admiring our new shirts.

Second half was more of the same except Stratford came out a little stronger and scored with a converted after ten minutes of play.  We also shared yellow cards in this half with Martin V taking ours (not sure what for).  We pressed near the end of the game (and had an attempt at a penalty kick which went wide) but it looked like we might come out short and I was hoping for a stoppage so I could send in an inspiring quote I was saving:

Be not afraid of greatness: some are born great, some achieve greatness and some have greatness thrust upon them". - Twelfth Night (Act II, Scene V).


Or I would have if Webs had not seized greatness by scoring a try in injury time.  Martin took the ball to the five meter line and with the help of the pack attracted 11 of their players to a ruck. When the ruck cleared up Martin managed to get the ball to Webs to touched it down about 10 meters from the sideline.  Then taking the ball and waving off others he set up for the conversion.

Somewhere clubs are winning
And making outrageous boasts.
But there is no joy in Bieberville,
Mighty Webs, he split the po   sts

(save your cards and letters, I know it isn't Shakespeare - but it should be.)

The new strip did well 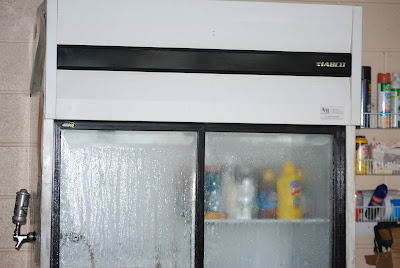 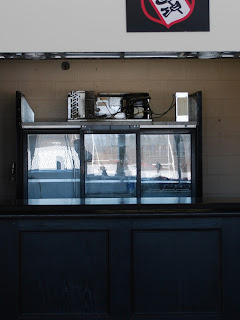 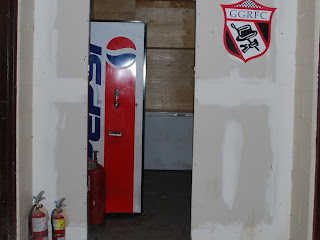