Conditions: Surprisingly nice considering it was supposed to be very rainy. Temperature about 20 degrees.

It could have been better if we had come in and blown them away and won our last league game but St Catharines had a deserving win. Our problem was again a short bench and a few niggling injuries. We had several blocked kicks which led to complications and scores for the Tigers. At about 13 min a blocked kick resulted in a try and a lost lineout at 25 min caused them to drive over for a try. Derrick made a good play on a poor pass by the opposition and as little kick on resulted in a Grimsby try at 30 min and Dylan made a difficult conversion. The half ended with yellows being given to goth teams.

In the second half the Tigers got their short lineout working well and we started taking a lot of penalties. A high tackle on the five resulted in a try for St Catharines at 53 min and a another blocked kick and pick up let to the fourth try at 68 min. Their coach (who was playing) got a yellow card on the last play.

The beer up was a an interesting place (a boat in the Port Dalhousie harbour) but the food was not good and it took a long time (one of the poorer beer ups).

Coach's report Once again we were struggling for numbers but put up a spirited effort against the Tigers. We did well defensively but had little real offence for a long period except for a period early in the second period when we recycled the ball about ten times. Vic did very well on the lineouts and we were a bit stronger in the scrum. It has actually been a long season since last March but I hope we will get a few more games in the fall.

final record: Won two (Kent and Stratford at home), lost twelve.
Posted by b stuart at 9:07 AM No comments:

Email ThisBlogThis!Share to TwitterShare to FacebookShare to Pinterest
Labels: St Catharings away 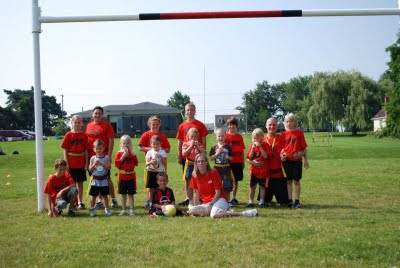 We are amazed by the job that Laura and Martin did with a very diverse group (size and age) in introducing flag rugby to Grimsby this past season.
They had about 15 players in two groups and gave them what seemed to be the appropriate amount of instruction and playing time to keep them coming back. On August 15th we brought the group to the clubhouse for a morining session and hotdogs, icecream and showers. Also some players children who were not part of the flag group came and leared some rugby.

This was with the Niagara Flag Rugby group and next year Laura and Martin hope to double the size and hold practices and a tournament at the clubhouse. Thanks for all your work. 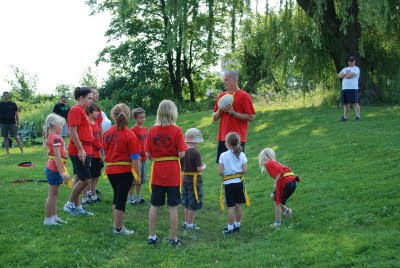 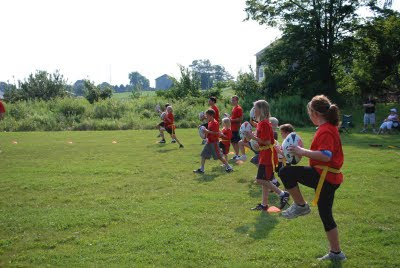 Laura and the smaller (but more active) kids 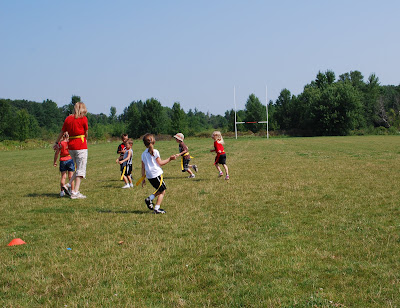 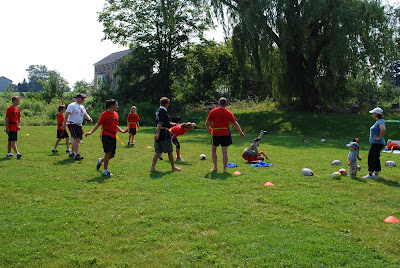 It was a hot day 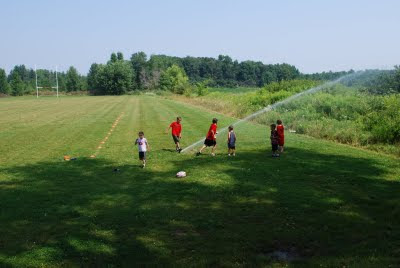 Parents wishing they could jump in the sprinklers 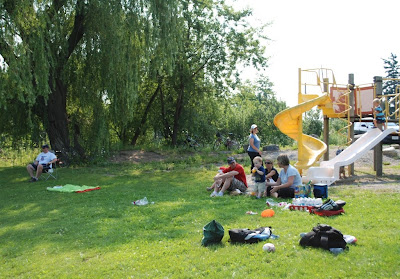 Andy, get behind the ball 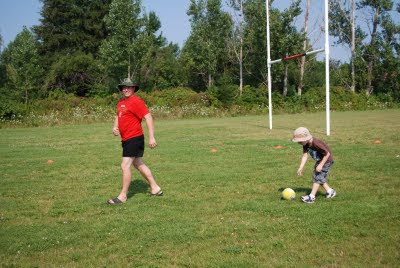 President's Report: Missed most of the game and caught the last twenty minutes when the game was tied 7 to 7. It seems we had a very good first half but could only score one try by Derrick W. and conversion by Dylan K. We could not finish and kicked the ball away a lot. With ten minutes, we were pressing and Jon M. had the ball over but was held up. At the end we lost composure, got unnecessary penalties and did not complete simple passes. Cambridge scored with 5 minutes to go. It was the second week in a row we lost in the last few minutes against a team much higher in the table than us. Once again, we just have enough players. Thanks to Bubbles for helping out by running touch and bringing water and cooking the hamburgers.

Their Man of the match pick: Derrick Weber

One game left.
Posted by b stuart at 5:03 PM No comments:

Email ThisBlogThis!Share to TwitterShare to FacebookShare to Pinterest
Labels: Cambridge

Attendance: Jamie, Kalie, Bubbles and family returned from down under, Jim Levens visited a few of his former players. About 500 in total for a hot day.

Presidents Report: Highland came down with about 20 players to play a second game in Hamilton at noon and a first game in Grimsby at 3. It was a hot, energy sucking day and the players felt it. The chance was there to defeat the best team in the league but we came up short again at the last minute. After about 25 minutes Highland scored first and converted. At 32 minutes some good offloading and rucking kept the ball alive and gave Bob M. a run down the side line to score but the kick after hit the upright.

At about 46 minutes Derrick W. hit a long 40 m penalty and then with 10 minutes left, Mike S scored to put Grimsby up 6 as the convert was missed. Unfortunately, with 5 minutes left we couldn't get out of our end and Highland scored and converted.

As president, I would like to get a team picture, but no one shows up in time to take it at the beginning and I forget at the end.

Sub: Ross McBride came on for Alex M at about 15 min and moved to flanker with
Bob M on the wing.

The sprinklers were a great hit.

An energy sapping day but most of Highland had already played a game and we need to be in good enough shape to play in the heat. Scrums looked better and we did well in the lineouts. We played as well, but they took the ball on the burst and gave us problems in the backs with our tackling.

Good game, both teams played well but Highland had better field position most of the game and could not finish.

Good game against the best team in the league.

Waterloo (a close second in the Jones division) plays their seconds (Cambridge) in the NRU A and their thirds in the Jones because they consider this division more difficult. We play Cambridge next week at home.

Their pick as Man of the Match: Vic Blaney (who had left) then Mike Stuart who cannot drink as proven last week.

We picked their fullback.
Posted by b stuart at 6:37 PM No comments:

Email ThisBlogThis!Share to TwitterShare to FacebookShare to Pinterest
Labels: Highland at home

Weather: Soft day with light drizzle towards the second half. About 22 degrees

Attendance: 13 players, 1 coach, 1 rabid supporter (Jamie) and a bunch from the other team.

Presidents Report: Highland agreed to give us two players but only after they were sure of beating us. Even with thirteen, it took them thirty minutes to get four tries and the bonus point. We helped them score in the first five minutes with a hands in penalty on the 20 m line, they took a quick tap and we could have been called not 10, but in the ensuing ruck we did not roll away and they again took a quick tap and scored and we got a talking penalty. Oh My God! We got better but Highland scored again at 10 minutes with a ruck at 10 m from our line and our flat line was ball watching and not covering the players. Their winger eventually scored on the other side, a problem with being short-handed. They scored again at 20 min and at 30 min. At this point, they offered us a player to give us fourteen but our Australian friend hurt his leg covering a kick deep in our end and they scored off that play at 36 min. Back to 2 players down, but we pressured them after the kick off and Alex Millar (playing as lock) put the ball down at 39 min.

Highland gave us a couple more players and Colin (and if you try to make me do a Zulu you will get a taser and a night stick stuck up your ass as far as it will go and you will get a parking ticket every day of your life, but don't worry you may not live long) Maisonneuve scored at 47 min with Dylan converting. However, Highland did not seem worried and scored again at 52 min, 54 min and at 39 min.

We went back to the Goofy Newfie (they are still working on their clubhouse) and they were generous with food and beer. Thanks Highland.

It is difficult to criticize when we do not have good practices or enough players but we did well in the scrums considering we were down players and all right in the lineouts with different players in different positions. We still need to improve fitness which everone can do on their own and be more mentally prepared for the game itself. Individually, a number of prople did well. Colin played in his first complete game at loose head and was competitive. Dylan did very well on the penalty punts. Derrick was all over and we welcomed Frank back after a long time. Congratulations to the team for playing hard right to the end.

It was certainly better than not playing.

We need more fitness and more players willing to travel.

We need to train more in beer chugging.

Coaches Man of the Match Colin Maisonneuve (good job at loose head, around the field, scored)

Their Pick: Mike Stuart for his couple of long runs and his drinking ability (they claim have already picked him for next week)