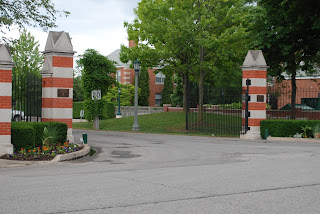 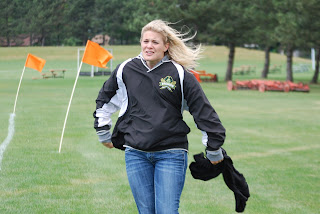 Attendance: We actually had a few supporters only one of which got upset when I took her picture but since Hailey plays for Thorold Badgers and signed the registration certificate we can use her picture.  Hailey also plays for Beansville High School who is up in Ottawa at OFSAA.  She also helps us out with the flag program showing little flaggers wrestling moves.  She is running touch for us.

This week We had two players playing for Grimsby for the first time Pat Brown at wing  (above) and Nick Lord at Prop (below). 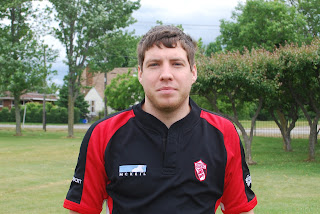 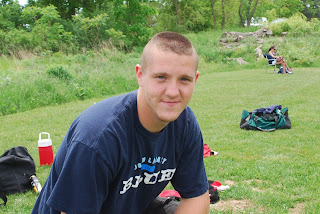 Below is Brad Vorstenbosh (hooker) who started for Grimsby last week for the first time but I did not have his picture. (Here he is) 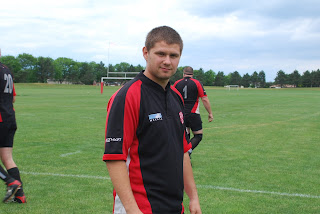 At the start the average age of the front row was 26 and after Nick went it it dropped to 17.5. This is our youngest front row in history. 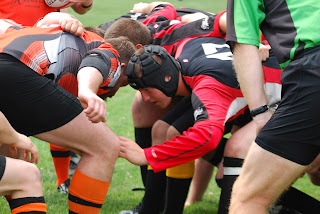 With eight of the players available this week, being in the first year of playing senior rugby and 5 of them being twenty or under we have quite a bit of inexperience and when we hit the Tigers with big forwards and lots of experience we did not come off so good but we will get better (they won't).  St. Catharines took it to us early and scored at 10 min (a large knock on was missed by the ref) again at 20 min. and once again just after that restart. We could not do anything as we did not have much of the ball. They ran one again at 28 min before Vic scored just before half with Webs converting.

In the second half the tigers put 3 more tries on the board before we got another near the end of the game by Nick Lemieux with Webs again converting.

This is Nick scoring his try. 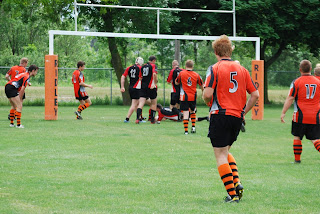 On the bright side even though they score seven tries they only converted two, while Webs has not missed yet this season.  (five for five)  The Tigers deserved the win as they were physically stronger and more aggressive.  They did better than us at the rucks and controlled the ball for the majority of the game.  We however are very optimistic that with the new players getting some experience and  some older players being available we will be competitive in the next few weeks.


The coach's pick goes to Vic who not only made good tackles and runs and scored a try, managed to blick a kick with his groin.  It would have hurt a mere mortal but he ran a good twenty meters before it had to be removed.  It was a bit of a cheeky pick. 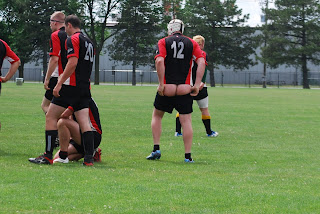 Even though I though I was up on social media by writing this blog it turns out that something called "Facebook" has been around for years.  So we have a facebook page to stay up to date on our schedule, news and events.  Make sure you keep sharing the link every week with all your Facebook friends.

The sixth playing of the stupid Brooker Cup goes to St. Catharines (maybe Kevin will drop it on his foot) but the largest winning margin ever.  It is also the first time a team has won it back to back.  Well done ttigers wait till next year. 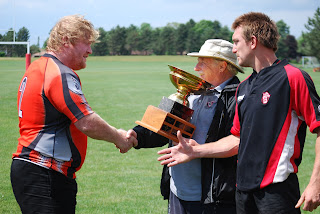 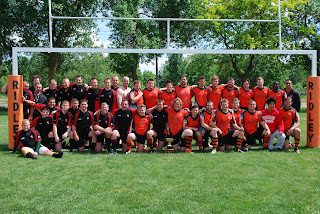 A shout out to those players (Bob and Brendan) who came out to see Bill Stuart and the Burlington Welsh with Jon Langford at the Horseshoe Tavern on Saturday. A rockin' time.