Referee: Geoff Holloway*** well done refereeing (although he did get lost trying to find the clubhouse on Kemp Road and blamed our directions)

Weather:  a very nice evening not too hot or humid (perfect night for rugby)

Attendance:  A bit small for a nice evening, but here are a few of the enthusiastic female followers. 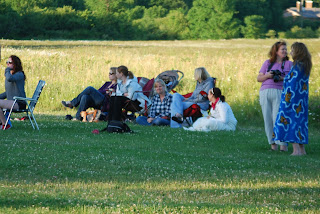 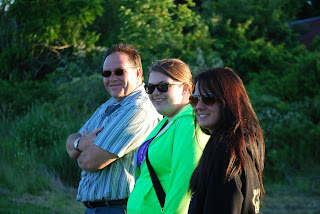 Guess whose Dad, sister and girlfriend are in the above picture.

The sun sets on our latest failure to hit the win column.  I hope Mohawk doesn't find out about  my coaching record. 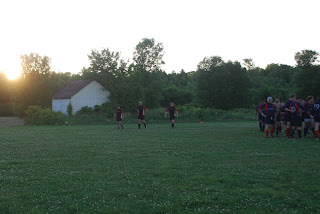 
We asked to change the date of this Burlington game so we could see how a mid week game went but mainly because we did not want to get up and play on Saturday after the Friday night Canada - Italy game in Toronto.  I had to get up at seven anyway for a flag tournament but who listens to me.   So we made it easy for Burlington to add more experience and bigger players to their lineup and of course they did, with about 9 players who played a higher level the week before. Although some players were coming off injury or paying in their not usual position. It showed early with Burlington take it to us in the forwards and scoring within three minutes and again at twelve minutes.  Most of the play continued to be in our end and they managed to score at thirty eight minutes and again, a killer, at fourty.  We managed to stop them from converting three of the four (yea).

We looked good for the first five of the second half with a lot of attacking ball, scoring five minutes in but Burlington immediately answered with a try of their own. The last score for the Centaurs came at about seventy minutes.  No trys were converted.

We did well in fixed pieces but had to defend a lot and got tired quickly. Burlington showed us a couple of times how set up and execute a rolling maul.

Our regular Captain and 10, Derrick, was recovering so Andy moved to fly half and did very well setting up some runs with Vic who scored our try.  When Vic came off injured, Alex became a credible center.
Alex was chosen as coaches man of the match.
This is Vic scoring the try with Andy and Alex ready for off loads (or something). 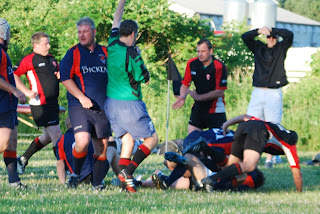 Burlington usually does not stay after for very long but did better this time and we got to talk to them.  They are not bath salt-smoking ogres as many have claimed and a very nice beer up was had by all.  Thanks again to Jennifer for  making salads.  We play their seconds in the next game and I suspect we will see many of the same faces although they do have to have three teams in three away venues this coming weekend.

Man of the Match: Burlington chose Alex Millar while firstly chose their quick little back but he had to go home with his mother so we picked the big Irish center.  So it was Ireland vs Scotland in the drink-off and Scotland won because Alex cheated (actually spilled beer-which is uncharacteristic for a Scots, I think) 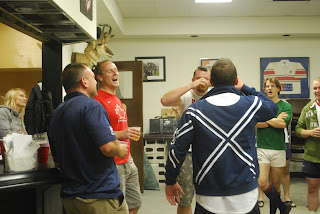 Below Alex has the group enraptured with his tales of how well he played and why he made the best decisions possible.   Thanks for playing on our team Alex. 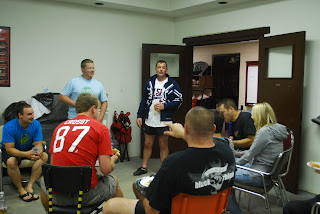 Below is an actual historical re-enactment of the first hanging of a fly strip in our clubhouse.  Thanks to Brendan for taking part and being ably assisted by his brother Brad.

This is Rhyan Millar and her mother.  Rhyan is wondering why we would do this to Bambi. 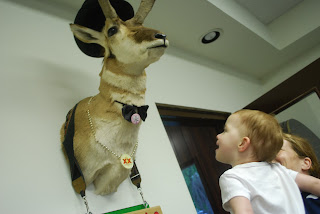