Our new clubhouse is almost finished, all we need is showers. 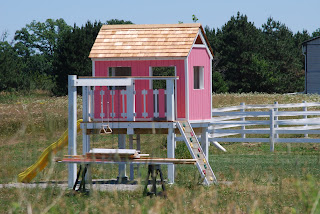 Thanks to Dirk for providing the flag, we will take care of it.  The last one was stolen from the clubhouse (not very Canadian). 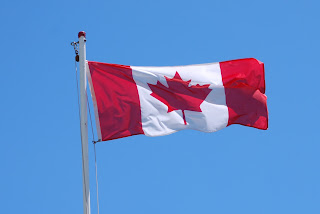 Referee: Paul Byrne***  We have had Paul for 3 of our 4 home losses and it must be his fault. Just kidding Paul, good game.

Attendance:  Both teams just had 15 at kickoff and they outnumbered the spectators by a lot.  Must have been a garage sale nearby.


We missed some important players in important positions and could not hold on to a good first half against a team in a higher division.  Compared to last week we came out better and Derrick kicked a penalty after 3 minutes.  Then at the 10 minute mark, Burlington made a good kick that eluded our winger and they scored and converted.  Unfortunately a bad kick off led to a scrum and a good attack which immediately scored.  However, Grimsby wasn`t done and with a quick tap by Nick Lemieux and a follow up by Derrick we got into the opponent`s end.  A few plays later our prop Jon Millington took the ball in at the corner.  Derrick then made a nice kick which just made it inside the upright  (expertly called by the line judge, although the Burlington players complained, but they even complained about the flies).  That was as close as we got as Burlington `s better running and ball control resulted in two more tries before the half.

I wish I could tell you that things got better in the second half or at least stayed the same, but I can`t.

Great strong play by the captain Derrick Weber and very promising play by our newcomer Pat.


Ireland got beat 60 to 0 by New Zealand, and at home it was Oakville II 56 and Brantford II 5, London St. George I 61 - Niagara Wasps I 7, and London St George II 57 - Niagara Wasps II 3 at home. So for the bottom team in our division to lose to the top team in the above division is not so bad and besides we had better salads by Jennifer Reichow (although  the odd couple spend the afternoon arguing why a simple burger hand-off went south and we ended up with inferior patties). When we go back to Burlington, I think we will be lucky to get anything (good or bad burgers) since we have not had anything for the last few years.  And they complained about a few flies. They did stay and drink some beer for a change. Thanks to Dan for taping the shoulders of a couple of players, somebody should hire this guy as a cop.  We have a weekend off before playing another crossover up a league game with Hamilton, which should be an interesting challenge.  Looking forward to it as we go into the second half of the league. 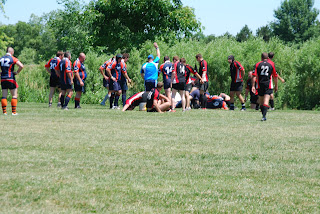 Somewhere in there, the only man on the field with white shorts is scoring a try for Grimsby (sorry for the focus).


Actually, that is all (the others are not very good).


My latest favorite quote by David Flatman who was a prop for Bath and got 8 caps for England.  From a column for the Independent on his retirement through injury.

I was never the best player in the world, but I always stuck my head in and tried for my mates and, when I think about it, that is all I ever wanted from any of the men beside whom I stood....
But rugby will also always need men who hold their clubs in their hearts, men who would never leave. Bath Rugby has been in my heart for a long time now and it always will be.