Grimsby Gentlemen 7: Waterloo IV (Renegades) 27
Referee: Paul Byrne (from Grimsby) ***
Weather: kind of overcast at the start about 20 degrees
Attendance: low turnout (Was the Pride parade on today?)
Team: Jon Millington, Brendan Sculland, Nick Howe, Dean Gibson, Jeremy Young, Bob Mavro, Martin Van Den Hurk, Dan Wolfrath, Derrick Weber, Andy Breuls, Trevor Trotman, Vic Blandy, Martin Colyn, Jamie Scully, Nick Lemieux (is that right Nick?) Nathan Rowbottom, Dylan Kinch, James Vinneau.
President's Report: The plan was that we would work hard on defense and deny Waterloo scoring chances. The plan worked well in the first half as they had the ball in our half for most of the time. We made some great tackles and and stopped Waterloo several time from in close but they finally scored at 23 minutes. Near the end of the first half we started to get into Waterloo's end with some great running by our centers Martin and Vic. Vic scored from 25 meters and Derrick converted at about 38 minutes.
Half time score: Grimsby Gentlemen 7: Waterloo Renegades 5
Waterloo looked like they were faltering at the end of the first but they took over in the second half and scored at 10 minutes. An injury to Dan our #8 resulted in changes to the lineup and we lost focus and our defensive abilities. Waterloo again scored at 20 min, 30min and 40 min. It is a good thing they could not kick. Waterloo, the first place team, gets a deserved win.
Final Score: Grimsby Gentlemen 7: Waterloo Renegades 27
Coaches Report: I am not sure if it means anything but we have had three home games and three serious injuries to three significant players. Also Martin Wolfe, our talisman, was not present and our winning streak ended at two. It was a great defensive effort in the first half but we could not sustain control and keep the ball for more that two phases. Again we did well in the scrums and poorly in the lineouts and we started to argue among ourselves in the second half, when the game was still close. Unfortunately, we kicked at their fullback a few too many times.
I took a few pictures first half but forgot to take any second.
Man of the Match: The captains pick was Vic for his hitting and running. I was not around for Waterloo's pick but will report it. Found pieces of slightly burned toilet paper around the club and wondered what that was about. 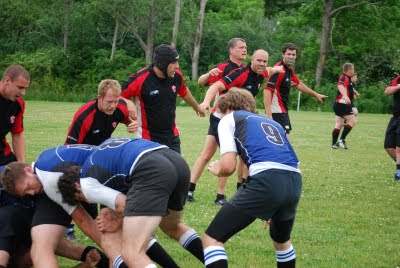 Our only try, a long run. 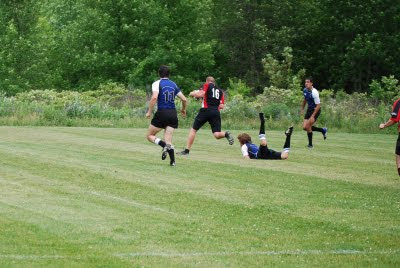 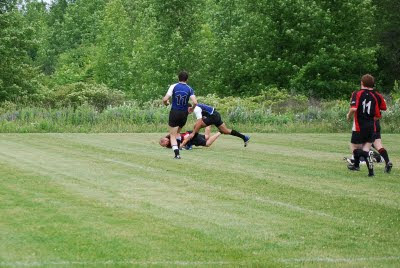 Milli going for a run 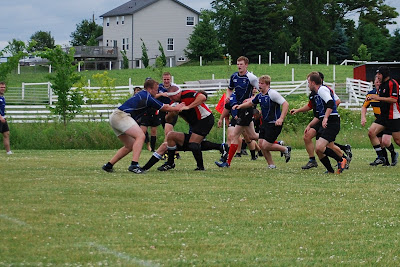 I though Martin would get all the way but was caught on the 5. 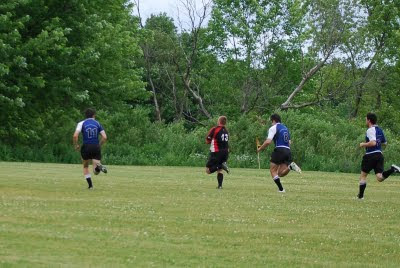 Webs getting a kick off 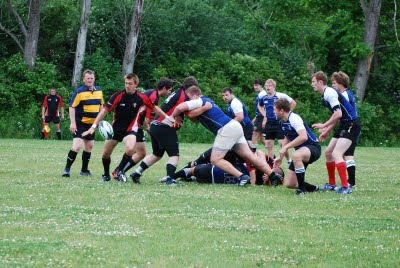 Quote: "Since there is no game next weekend, don't anyone show up for practice this week"
If you heard this, it was actually a plea to get people out for practice. The old reverse psychology ploy.
If you read all the way to the end then you will find that this is the 60th installment of "a Holigan's Game" starting December 19, 2008 and has been viewed 3, 583 times as of right now.
Posted by b stuart at 1:17 PM