Grimsby Gentlemen 25: Niagara Wasps II 27 (according to information gathered: but the league says 24 to 27 that I know is wrong)

Venue: Niagara Wasps new field in Thorold.  It is called Niagara Farms so they do not yet have to pay to sever the property from Wayne Hodgin's farm. Taxes will go way up when they build a clubhouse. 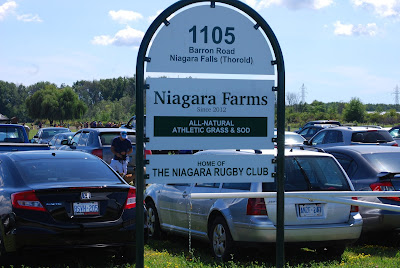 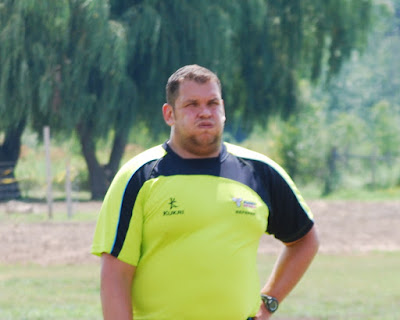 Weather:
Warm in the thirties but not as humid as Chatam
Attendance:

Game: Niagara started out well with two tries in the first twelve minutes but Grimsby strikes back at 15 minutes with a nice break by Jake who then off loads to Derrick who scores under the posts.  Derrick also converts. At about 22 minutes, Derrick hits a penalty but Niagara responds with their penalty very quickly after.  However at about 32 minutes something happens (should pay more attendion) and Jake scores with Derrick converting to have us take the lead by two.  Derrick extends the lead with a penalty kick just before the interval.

Niagara came out strong to push us back into our end and score at about 6 minutes to tie the game and at about 28 minutes score and convert to push their lead to seven.  Here's where things go a little foggy (actually a lot foggy) and the next thing I remember is getting wheeled into an ambulance to spend the next 5 hours at the new Niagara Hospital in St. Catharines.  Seems like as I was standing near the field and I attempted to cushion Vic from a nasty fall and was knocked out.  I am fine thanks but I did miss an exciting final (they played around me).  From a ruck Eric picked up and fed to Nick Lemieux who scored to bring us to within two points with three minutes left.  Unfortunately, the convert bounced off the post.  But is was a very good game overall as we came back a couple of times.


The instructions from the hospital was that I was to be aroused every two hours, well Beth tried valiantly but at my age there is no way I am going to be aroused that often in one night.

This was the last league game of the season and we end the champagne with a 1 - 9 record (although with the power invested in me as club president I invalidate the score of the first game against St. Kitts as they did not really have enough players and declare a default by them to give us another win).

We played another friendly in Burlington and although we needed to borrow several players still managed to be competitive in the first half until they loaded up with more experienced players in the second.

The flag rugby program (the Grubbers) ended their season on the same day as the Niagara game and I did not get many pictures (I was refereeing) but here is a picture of all of the players that day in Grimsby.
Grimsby is in white. 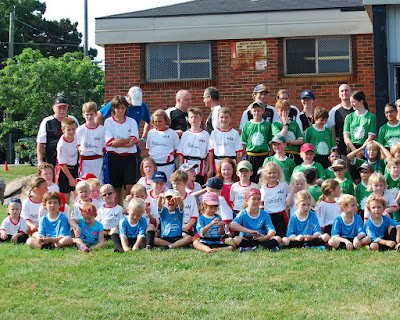 The flag team had their year end party on Monday 17th (forgot camera) but we had a parents- kids flag game, a slip and slide (designed by Brian Blake) and bottle rockets also by Brian.

Great season Grubbers and thanks to all the coaches.

Sixteen days, twenty-two hours, fifteen minutes until the kids go back to school.