Grimsby Gentlemen 12: Stratford Blackswans 24  (I am back to reporting scores)

Weather:  a cooler 14 degrees with a rare northwest wind

Referee:  Jeremy Inglis (a Grimsby local who would like to practice and get a few games with us this year) 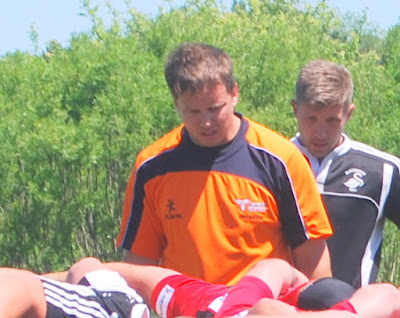 Attendance: definitely more than last week but the person responsible for actually counting is on strike(again).

Game:  We had our traditional start to the game by letting Stratford score in the opening 5 minutes. But the rest of the half was quite a bit of back and forth.  We had the advantage at the scrum (won all our head and turned their scrum around most times to get the feed back) and did well at lineouts.  Stratford did very well at the rucks and kicked often to put us on the back foot.  Jaamie (first game this year) had some great runs as fullback (he was hard to bring down all game).  Near the end of the half a lot of pressure on our line led to a penalty try to put the visitors up 12 points.

After a good but uninspired first half, Grimsby came storming back to put pressure on Stratford for long periods in the second. At about 5 min of the second, we got the ball to Vic who charged forward to put us on the board for our first try in 2 games. Then a couple of minutes later a #8 pick up by Vic from a scrum about 10 meters out led to an off load to Nick Lemieux who scored near the posts and with conversion the game was tied and we had  momentum. .  We continued to attack and pressure them and were pressing again when an errant pass was picked off and run almost the entire length of the field (Jamie gave chase and made him run the whole way- if the field was 10 meters longer he would have been caught). At about 24 minutes Stratford scored again and although we had a try held up somewhere in there,  we could not get closer.

Much better game than last week with a stronger scrum (actually theirs was not as good as the Harvesters) but we played much better all around.  We need to build on that. Ross mentioned the contribution of the new young players (Drew, Heri, Duncan, Austin and Jeremy)  to our improvement in this game.


It was fun showing Stratford around the clubhouse (still under construction) and since we have not been up there in a couple of years we have not seen their new field and club association (Army -Navy Club).

Dean Crozier (Kiwi - the Original) who played with us in 2012 and 2013 is over from New Zealand for the next month and hopes to get in a few games.  Welcome back Dean 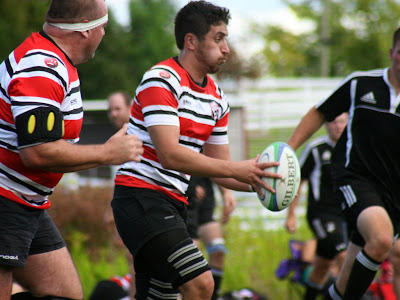 This is the new playground that was put up this week after the town took the old one away.

Next game Saturday in Wilmot with Wilmot returning the following Friday night.

Email ThisBlogThis!Share to TwitterShare to FacebookShare to Pinterest
Labels: Stratford