Venue:  Waterloo-Oxford District Secondary School in the Town of Baden in the Township of Wilmot 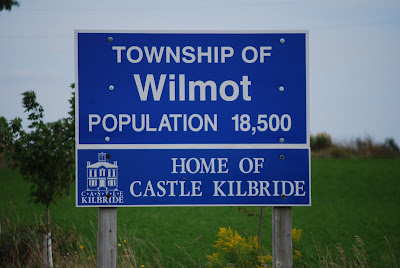 Weather:  Nice day out in the farmer's fields (24 degrees).

Attendance: Some of the faithful:

The Game:
We knew going in to these back to back games with Wilmot that it would be win even one of them.  So the strategy was to play poorly enough in the away game to lull them into thinking they could beat us in the return game easily and perhaps we could get a much needed win at home.  The coaching staff does not want to take all the credit for this brilliant gambit , so well used last by the French in the 2011 World Cup (they did not actually win the cup but lost to New Zealand in the final 7 to 5) , it really was the players who bought into the plan and wiithout their hard work at looking awful we might not prevail.

I got to the game late as I was with the flag tournament at our club (they were probably having more fun) and the score was 17 - 0 at the half (which was a little too close for comfort) but the our players dug deep and took a lot a penalties and a yellow to get the final score to 41 to 0. Now it only remained to wait a week and see if the rest of the master plan would be delivered (God willing).

I did not mention that Ross  got our first yellow card of the year against Norfolk for some evil deed.  The odds that Ross (coach, captain, lineout whisperer)  would get the first were a fairly long  ten to one.  But the second came in this game by Nick Lemieux and you could  have won fifty bucks if he had gotten the first card.

We went back to their beer up (eventually - it was in an Irish pub called Kennedy's in a town even smaller than Baden called St. Agatha)  knowing we had the advantage but we did not want them to realize that.  We even stayed later at their event than they did.  Vic was chosen man of the match but had left so Jamie Farrell - who had stepped into the 10 position because we had injuries and played very well - was their second choice.  Although a university man, I think Jamie goes to school to learn and not to chug beer and did not do well against a seasoned prop.

Email ThisBlogThis!Share to TwitterShare to FacebookShare to Pinterest
Labels: Wilmot away