The Grimsby Gentlemen would like to announce that because there is much to much emphasis on winning and scoring of tries and that we would like to encourage out elder players to come out and play without worrying about actual outcomes of games and can enjoy the playing without pressure that, for the near future, we are not longer reporting scores.  Screw you all.
Would all Grimsby players please pick up their participation ribbons at the next practice.

Venue:  Waterford District High School in Waterford which is somewhere in southern Ontario. The Wolves are the name of the High School Team - we played the Harvesters. 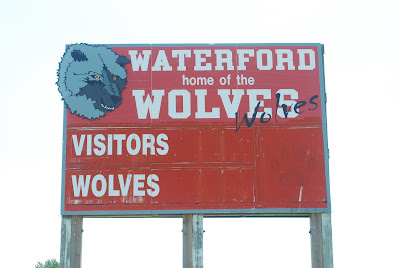 Referee:  I am not sure (sorry ref), it definitely was not Ian Stewart.(for the first time in three games) 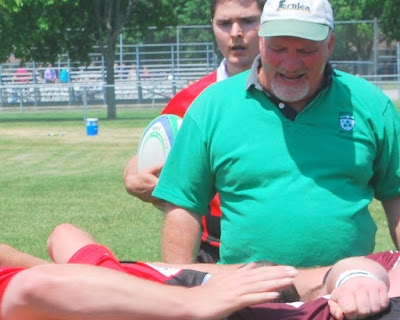 Weather:  It was a warm 28 degrees which had a feel like of 34 degrees when we played (our plan B was an expected a rain storm to come through and cancel the game). Cameron says they have heard of weather this warm in Northern Ireland and he was in it once or twice but he never played rugby in it before. Twenty-four hours later it was 8 degrees.

Attendance: It turns out the supporters bus was delayed and did not arrive until after the game and the players decidedly missed their encouragement. (Jake drove up on his own and ran touch)  Also seen on the sideline were:

These are players who played last week but I did not get a picture to introduce  them.  This was their second game with Grimsby (they came back).


We got 13 hits from Ireland this past week so Cameron must be as much a celebrity over there as he tells us he was.


Game:  Many of the Harvesters were big players (how they got those oxen to run on their hind feet I will never understand) and basically took care of the ball.  Our backs were starved  all day and could do little with the ball they got it as we were going backwatd in the scrums, rucks and mauls.  Cameron managed to impress them with some long kicks to touch but otherwise it was a long, hard afternoon.  Norfolk scored three tries in the first half and then opened up in the second.  There were a few sore bodies on the drive home.


Afterwards at the beer up, Erick Alvardo , who needs practice drinking beer, was picked man of the match by Norfolk. This was his second man of the match honour in a row.  A fantastic opportunity has come Erick's way as he has been selected to go to England to train with the Huddersfield Giants' rugby league team for three weeks and then he is off to B.C. to practice with the Canadian u 20 team, the Young Wolverines, and then play an international against the English u 20 team. Unfortunately he will not be able to play with us until he comes back.  We will miss you Erick and the best of luck from all the Gentlemen.

Norfolk's  president pointed out that some dozen years ago Martin brought the Gentlemen down to play the Harvesters in their first game ever.

On the home front, Brendan Sculland and Nick Lemieux spent 3.5 hours last Tuesday mixing 48 bags of cement in wheelbarrows to fill in the shower pans. Lots of work will be done on the club in the next couple of weeks.

Blessed Trinity a first year team in Grimsby actually qualified for OFSSA boys but because you must be 16 to play at OFSSA they did not have enough players over that age and had to decline.  Great start to the program Jim and Chris and well done.