Stratford away (VllI of X) rescheduled

Venue:  At Stratford Northwestern High School in Stratford,. We were unable to come up with enough players originally in July so the game was rescheduled by Stratrord for Friday under lights starting at 8:30. 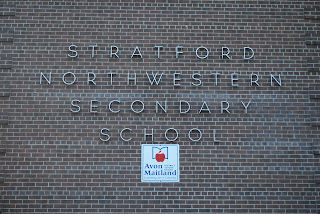 Referee:  ***I missed his name but he does a lot of better club and university games around Waterloo.  He knows a lot and shows it.

Weather: A nice clear summer evening but it did not cool very much.  Probably about twenty five degrees with no wind. A quarter moon waxing.

Attendance:  There was quite a crowd but I guess there is not much to do in Stratford on a Friday night unless you are doing a Shakespeare tour. 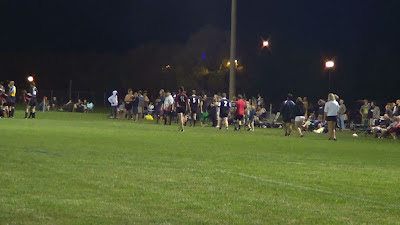 I heard a rumour that much of the crowd came out because there was a Justin Bieiber sighting but it was only our Milli. who, from behind, I mistake for Justin all the time. 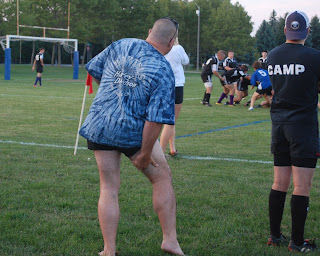 Team: We had enough players in theory but in practice but Bob came back from Vegas several dollars lighter and with some disease and  the plumbers got lost somewhere around Brantford and never did make it. But some St. Catharines players helped us out including another Nick.

Stratford came out strong and controlled things at the start with their left winger scoring at 10 min.  They had most of the territory and a lot of the posession but we did get the ball once into their half at about 25 min and were rewarded with a penalty kick by Webs from the 22.    At about 28 min, the same winger scored with a strong run for Stratford.  Then later in the half, we were out flanked and Stratford scored again.

The second half was turn around, we kept much more possession, had more territory and ran at them.  About 15 min in, Jamie took the ball from a drive play in the lineout and ran around the maul for about 10 m and scored (see below) for the second time in two games.  Webs made the conversion. 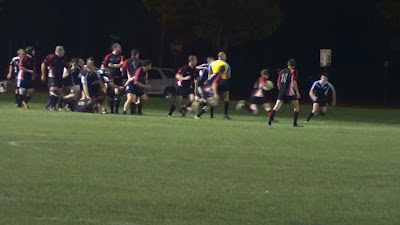 With 10 minutes to go an attack from a scrum by the 9 (new Nick), to Webs, to Vic who with a looping pass got the ball into Martin's hands who scored to tie the game at 15 each.  The kick was missed so the tie stood until with a couple of minutes to go the Stratford 10, who had missed all conversions and a penalty in front actually made a drop goal to win the game. 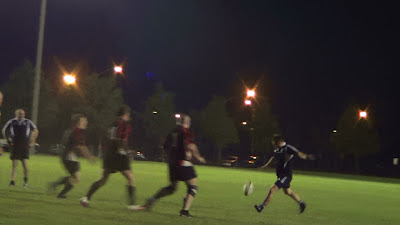 It was a good game and as Kyle says we do not lose our first draft choice next year by beating the second from bottom team.  We did get a bonus point.

Stratford did us a favour by rearranging the game  and it turned into a good,  fun evening and different from the rest of the season to be playing on a Friday at night.  Afterward Stratford took us back to The Poor House and treated us very well.  Even Scully was full.  Thanks to those players who came up from the farm team. It was a good season with us introducing a number of new players to the team.  It would have been nice to win a few more but generally we played well.  It shows we need more than 22 on the roster.  Thanks to all those who made an effort to make all the games and practices.  Out of the ten games we only held the other team to less that 5 tries twice, so we need more work in the defence department. Our under 14 flag team came second in their tournament last weekend, congratulations and hurry to grow up.

Man of the match:  Derrick Weber who kept us from going farther behind in the first half by his tackling and played an important link in the second half.  He also had just stepped off the plane at 4:00 that afternoon.

The following are pictures of Martin's decorated car that will be smashed in the Smithville Fair Demo Derby Labour Day Weekend. 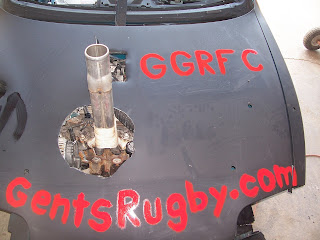 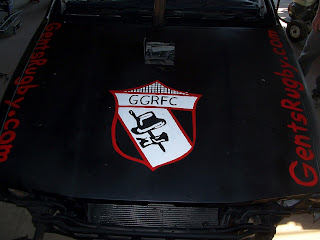 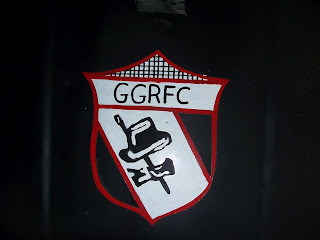 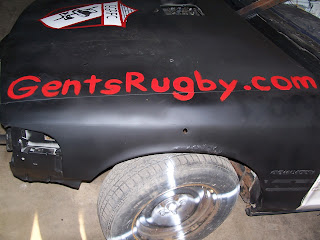 Our shirts are finally going as Webs (10) got ripped during the game.

We have nothing much organized for the fall but hopefully the Steamwhistle brewery  tour happens on Sept 8th and we can at least get to the Waterloo Oktoberfest Tens at Thanksgiving.

I will be coaching the Mohawk Men's team and you can check them out at Mohawk College Rugby.