Knaves away (in Brantford) Week X of X

Venue: Grorge Jones Park in Brantford because Waterloo's first and seconds were playing there and the thirds and fourths were having and end of season party in Paris so Waterloo wanted to play in Brantford.  (Or something like that)

Referee: Eric Cizar *** actually one of their coaches but kept the game going long enough for us to win in the last minute or two.

Weather:  Nice day at about twenty five degrees with no wind but a high UV index. So it turns out we can also win in sunny weather. 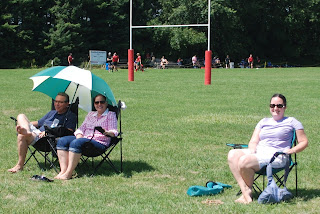 Attendance: These were the supporters on one side of the field and many more in the shade on the north side (I think). 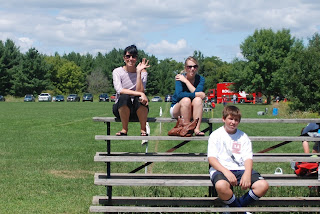 I don't think the kid is actually one of ours.


Team:  We were short players for the first time this year. So The Knaves graciously lent us a couple of theirs.  These players did not seem to be slugs and played well.

We had two injured, two working and three on holidays and the game's afoot for Alex.

The coach was in Niagara On the Lake in the morning with the flag kids and was passing through St. Catharines on the QEW when the kick off took place.  So I only got to the game with about twenty minutes to go and it is a good thing because my heart might not have taken it.  I saw 6 tries altogether in the final 20 min with the lead changing four times and us coming out ahead with a last minute try.  The following were the try scorers in the game with four scoring their first try for Grimsby. (It's a good thing we banned Zulus because we would have used up all their toilet paper).

Well done Gentlemen,  it is unfortunate we had to borrow players and it was the first time in a couple of years we did not have a full team.  Thanks to Brendan who hooked again this week for us. Thanks to Waterloo for lending us a few, they could have played with us down two until the score was run up or they could have given us players who did not try.  It shows we need more numbers on the roster, even if some people get less playing time. Waterloo also took care of us with a beer and food so thanks to them.  Waterloo lost the Marshall game 29 to 28 and now the Creek are on the bottom since they lost.  However Creek have the easier schedule in September and should manage to stay up with either Brantford or Waterloo (who just came up this year) being relegated (or Markam Irish).

I did not see much of the game but Pat scored the winning try and played very well in the full back position.  Vic's imitation of a soccer player gets an honourable mention.

Here is a picture of Webs in action. 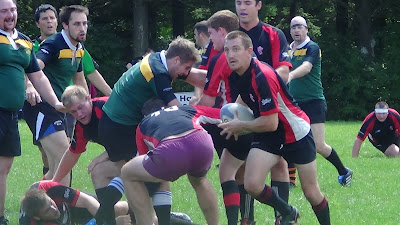 This is a picture of Waterloo in action, showing a great lift in the lineout. 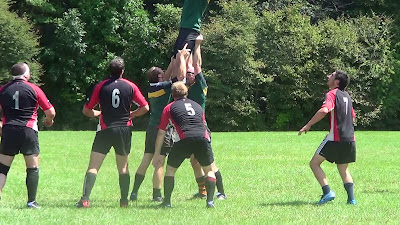 Looking at the picture below, I was just wondering what regular young men do on a Saturday afternoon. 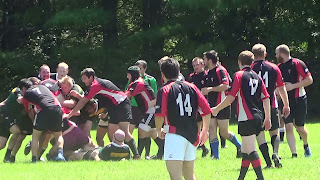 Here are our young men, who just earned a bonus point. 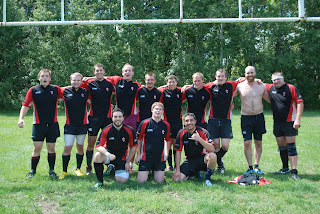 One more league game left. Friday night in Stratford.
Posted by b stuart at 12:17 PM