Weather: Turned out to be a nice day the got cooler as the game went on and fog started to come in with a heavy rainstorm just after the game ended.

Attendance: We did not reach the 500 mark again for the second home game.

A new fan and my Granddaughter Tayla with my daughter Erin 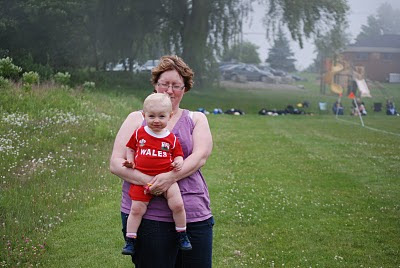 Once again we just got enough players at kick off but it is difficult to organize and a demoralizing for the team to not get enough preparation time. We need to make a better effort. Kent seemed to get more possession and position in the game but could not effectively make much ground and threatened only one or twice in the whole game. Our forwards were able to establish themselves at the set pieces and stop them from punching the forwards off the ruck. They did not effectively kick and did not really put us under much pressure. They hit for one penalty after about 20 min but Dylan answered with a forty meter kick soon after.

Second half was more of the same with neither team really making any significant headway. The ball tended to get locked up in the rucks and become unplayable. Kent struck for a penalty but very quickly Dylan answered with another almost 40 m kick. Grimsby went up three points with another penalty soon after and were unlucky not to score near the end when Kent seemed to tire and we had a flurry of plays in their 22.

Dylan lining up one of his kicks. 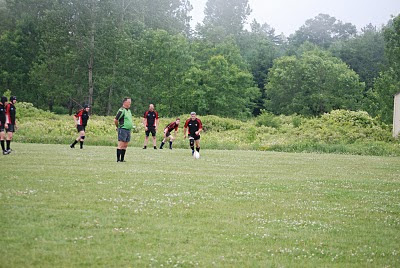 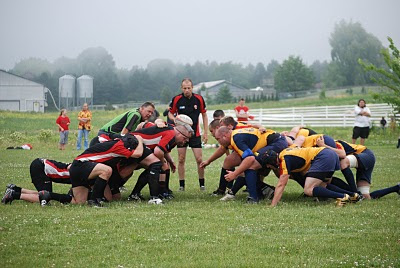 It is difficult to get anything significant going in coaching with limited number in practice - we need work at tackling and going into contact. Our advantage is that we have not yet met a pack that can push us around and so we have some opportunities to work with that strength. If we try to keep everything simple and straight forward we should be able to do alright. It is not as demoralizing for the team if everyone was at the clubhouse or game earlier so we can get organized.

From Under the willow

We should have been able to score a try.
Thanks to Bob and Billy (the Greek wet-on-the-back)for the food and social and thanks to Bubbles for cooking in the downpour.
I think I will drive where the other people have driven and I won't get stuck.

Coaches Man of the Match: Jon Jeske - all over the field

Their select: Dylan Kinch (the kicking machine)
Posted by b stuart at 10:17 AM