Weather: Warm and humid with a wind

Attendance: a few supporters but most missed the bus

I was not available for this game as I was away in Wales watching Wales lose to South Africa 34 to 31. I was hoping for a much closer result (the Grimsby game).

This is me before my tryout with the Gwent Dragons. 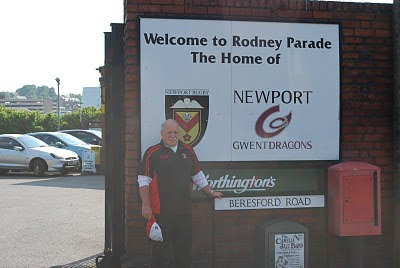 This is me with Colin Charvis who is the coach of the Newport Gwent Dragons who wanted a picture with me. Colin has been the captain of Wales and has been a British Lion. He has the world record for a forward in scoring tries (22) in test matches and is the most capped forward in Wales. He is considering coming to Grimsby for coaching experience.

When Colin stands up, I come up to about his knee. 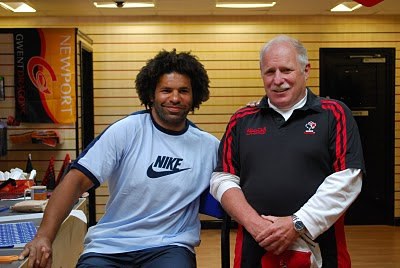 The following report was compiled by the team captain, Derrick.

We started flat and had no pressure on Cambridge who created overlaps and scored within two minutes. The continued to move the ball wide which we could not answer and by 20 minutes we were down 21 points. But on the ensuing kick off our forwards led by Nick Lemieux(?) took charge. We realized we matched up well against a younger inexperienced pack and with a few crashing plays Victor sliced through the line and scored dragging bodies with him. The convert was missed.

However, we lost the ball in a ruck on the ensuing kick off and Cambridge ran wide to score and added one more try off a quick lineout before half.

Last year it was a very similar score at half and we took it to Cambridge and won the second half but this year was not to be.

The second half was similar as we over committed to the Cambridge forwards and they passed quickly to the outside center who scored twice more. We were held up once in their try zone The next scrum led to a high tackle by Cambridge on Nick L. and a penalty try was awarded. The convert was again missed.

We need to use the forwards more as in rolling mauls.
Do I still get credit for the try? (not really but we will make an exception)
I wish I was five years younger.
Players need to be more organized and get to games earlier to have a proper warm up and preparation.

Cambridge's pick was Derrick Weber
Posted by b stuart at 9:37 AM