Gentlemen and Aliens: A Friendly

Grimsby Gentlemen 30: Hamilton Hornets II 19
Venue: Alway Field
Thanks to Philip who painted the numbers on the lines for those players who get lost on the field but it must have tired him out as he did not play. 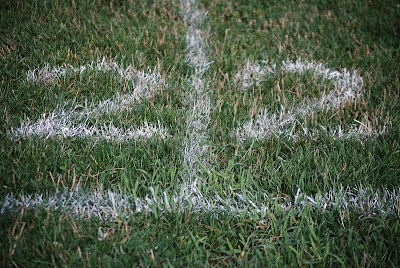 Referee: Paul Whaling*** an "international" referee from Rochester. Paul did a very good job; he knew what he wanted and was decisive about it. He might not come back again because of the following picture. There is something defective about this camera and I need a more expensive one. Weather: A nice sunny evening (7:00 start) mid twenties.
Attendance: A nice evening and relatively well attended although there are a lot of other distractions this time of year. Martin Wolfe was not there and for the first time this year we won without him. Perhaps it was because of Frank Shulte (courageously coming to the game on his 10th wedding anniversary) who encouraged the boys but did not get on the field. Injured players Nick, Dean and Wally came out to support the side along with Elizabeth and some friends. 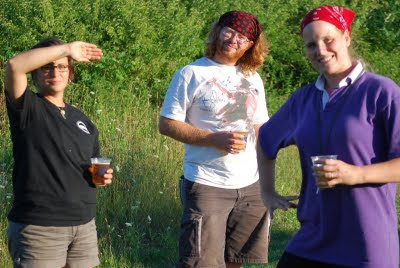 Thanks to Frank who did the BBQ and Dean who worked the bar.
And below is [insert name here] showing her Dad, Alex Millar, how you are supposed to run with the ball. 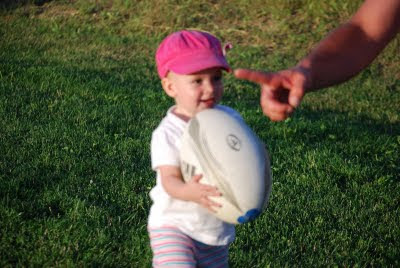 Team: 1. Nathan Rowbottom, 2. Brandan Sculland, 3. Jon Millington, 4. S.T. Cath, 5 Bob Mavro, 6. Martin Van Den Hurk, 7. Alex Millar (60), 8. Vic Blaney, 9. Derrick Weber, 10. Andy Breuls (60), 11. Trevor Trotman(40), 12. James Vinneau (40), 13. Martin Colyn, 14. Chris Short, 15. Nick Limeaux and thanks to three players pulled up from the farm club who played in the second half.
President's Report : Overall it was a good game played in good spirit which does not always happen between Hamilton and Grimsby. We have not played them for a couple of years and they obliged by coming to us. They had some fairly large players and we did not play the same level of aggressive defense we had last Tuesday against Niagara. The scoring was back and forth in the first half. Hamilton scored first after about 15 minutes of 10 man rugby. At about 20 min we caught a lineout in their end (not a sure thing this year) and drove the lineout until Nathan grounded the ball. Chris converted. Shortly afterward, Derrick picked up a ball from a ruck and found a gap (I missed it as I was chasing a ball in the bush). Again though we sat back and let the heavy runners from Hamilton do their work and they scored twice, converting one. Five minutes to the end of the half, Chris hit a penalty goal and we reduced the lead to four.
This is Nathan's try off a drive from a lineout. 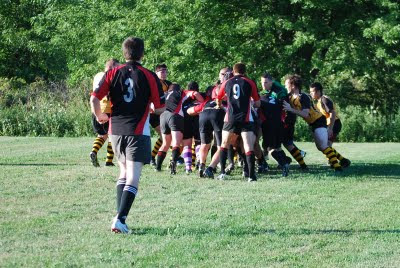 Half time score: Grimsby 15: Hamilton 19.
In the second half, Hamilton introduced some younger subs and we got away with some runs in the center. Vic took a crash ball through the centers at our fourty and out ran everyone to score. Chris Hladrick ? later crashed center to score . One of these was converted. Hamilton seemed to less offence in the second half and at 80 minutes, Chris got a chance to hit a 40 meter penalty goal, which he slotted.

This is Vic's run through the centers in the first picture to score in the second. The rest of our team was sensibly conserving energy for the restart. 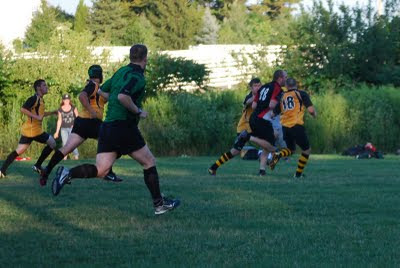 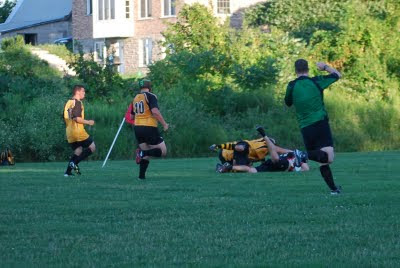 Scorers:
Nathan Rowbottom 1 T (second game in a row) ; Derrick Weber 1 T; Vic Blaney 1 T (second game in a row); Chris Hadrick? 1 T
Chris Short 2 C, 2 P
Coaches' Report: Well done Gentlemen. I suspect they thought it was going to be easier. Pictured is a dejected Hamilton side line. We did well on the scrums again and better in the lineouts. Some good kicking often got us out of trouble in the first half. Hamilton seemed to play a lot of 10 man rugby running with the ball into a ruck at every opportunity. We were slow covering the rucks, ball watching, not communicating and not attacking (taking away time and space). We put together better runs in the second half but I think Hamilton was weaker. 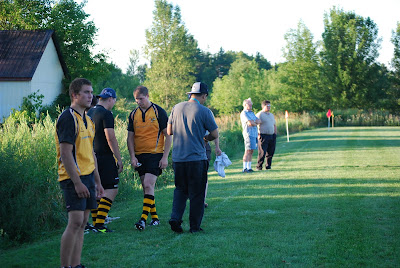 Coaches Man of the Match: A lot of honourable mentions, Webs, Vic and Chris. Chris's record in two games of kicking is 18 points (6/8 conversion goals and 2/3 penalty goals - he has both made and missed a 40 m penalty). The man of the match (consensus on the sideline) went to Nathan Rowbottom for his scrum work, and play around the field (hard tackles).
Hamilton's Man of the Match: Derrick Weber
Some Hamilton players felt we should be higher in our table than we are but I think the A1 teams are not as good as the B.
There is some question if I am a life member in Hamilton since I am on their web site as being one but no one has ever actually officially told me. Tom Edwards, Hamilton president, said he thought that if it was on the website then it must be true but he also thought I had played for Canada. So who knows.
Bored of the Flies 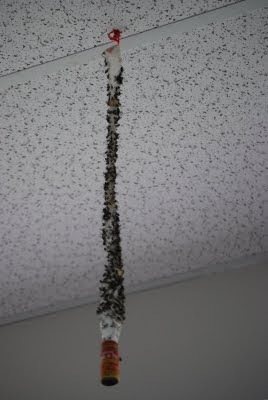